From conglomerates to kitchens

From conglomerates to kitchens 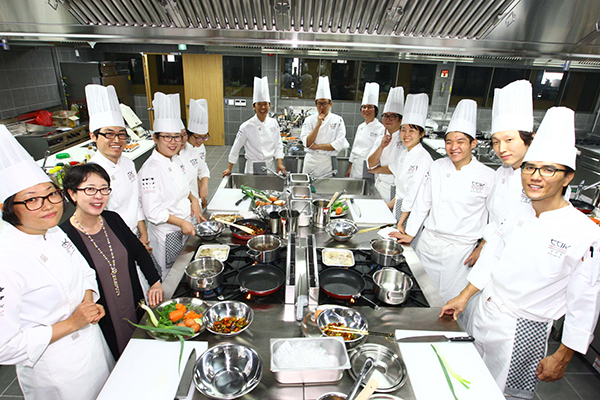 Jung Hye-jeung, head of the Creative Culinary Institute of Korea in Jeonju, North Jeolla, second from right, aims to educate chefs specializing in Korean cuisine to encourage the globalization of Korean food through the school’s two-year program. By Oh Jong-chan


JEONJU, North Jeolla - “Putting together all the different ingredients to make tasty food that is also good for your health ... I think that is one of the most attractive things about being a chef,” says Kim Moon-jung, a 35-year-old trainee at the Creative Culinary Institute of Korea.

Donning a toque and apron, Kim looks like every other trainee in the course. But her background is quite unique for the profession.

With bachelor’s and master’s degrees from the esteemed Korea Advanced Institute of Science and Technology, Kim developed her career at the IT firm Samsung SDS as a programmer and also worked as a consultant at the accounting firm Deloitte.

But there was a sense of emptiness she felt from her working experience at top-notch global firms.

“I felt I rarely had a chance to express and apply creativity and innovative thoughts to my previous work,” the trainee says.

Kim says she realized she might be able to apply those skills when cooking Korean dishes. “I wanted to experiment with new flavors and various cooking techniques.”

Kim is one of the 14 trainees admitted to a two-year-program at Jeonju’s culinary school, which first opened in September of this year. The culinary institution was founded by the government with funds of up to 12 billion won ($10.8 million).

Located within Jeonju University in North Jeolla, the newly launched institution aims to produce chefs specializing in Korean cuisine who can promote the likes of bulgogi, or marinated beef, across the world.

During its first admissions cycle, recruiters say they were surprised by the backgrounds of applicants.

“A high number of those with impressive qualifications who were strong candidates in the job market submitted their applications for the program,” says Jung Hye-jeong, head of the culinary institution.

“I think the fact that the school is government funded appealed to many applicants, which numbered over 100, despite its seemingly high tuition costs of 5 million won.”

The school also boasts lectures by prominent chefs with experience in the kitchens of Korea’s top-class hotels for nearly 30 years.

Lee Chi-hoon is the oldest student among the 14. The 40-year-old former businessman in the information technology industry in China with a master’s degree in informatics from Yonsei University says spreading Korean culture beyond the country’s borders seemed more appealing to him than running an IT firm.

“Having a role in helping the Chinese know about charming Korean dishes is one of my goals,” says Lee.

Among the 14 trainees are a handful of former employees of major conglomerates such as Hyundai and SK.

Those with a depth of experience in culinary careers also knocked on the academy’s doors. Lee John-yeong spent seven years in hotels and an embassy in Eastern Europe.

Lee told the JoongAng Ilbo he found it hard to find published Korean food recipes, which he is intent on producing after the two-year program at the culinary school.