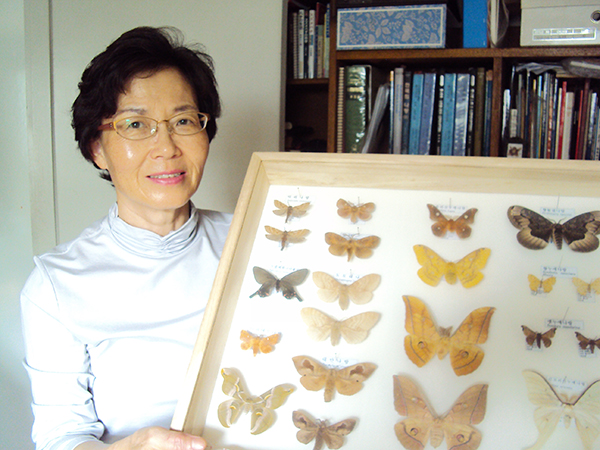 Heo Oun-hong, 60, also known as the “Moth Mom,” holds onto a self-made display of moths she looked after. By Choi Mo-ran


For the past 10 years, 60-year-old Heo Oun-hong has been exploring the peninsula’s fields and mountains recording how a total of 468 larvae metamorphose into moths.

Based on the extensive research, Heo recently released her first-ever publication on the subject, “An Illustrated Guide to Moths and Larvae,” which demonstrates the meticulous growth processes through photos and text.

While there are already numerous books on moths, this is the first time that a detailed pictorial publication has been made available in Korean.

And it comes from an unlikely source - a woman who is not a certified entomologist but rather an ordinary homemaker with a passion for bugs.

Biology was in fact her least favorite subject during her high school years. With a university degree in history, she was indifferent toward insects.

But all this changed 10 years ago when she began to work as a volunteer at the Gildong Ecological Park in eastern Seoul.

“While working with the kids as their ecology teacher, I found that it was fun to collect and study these insects with them,” Heo says.

One day, when Heo discovered a newly metamorphosed moth, she mistook it for a bee larva when it was actually a moth larva. As Heo carried on studying moths, she became more and more fascinated by this insect.

From that point on, Heo began to tour the country including Mount Seorak in Gangwon and Mount Hambul in Gyeongju to collect different types of moths. She even went to Japan to purchase a book on the insect and began to properly conduct research.

Heo lived with her husband in a small apartment where the utility room and small bedroom both served as her workspace and laboratory.

The thick curtains in the bedroom served to conceal the sunlight, and there were about 100 insect cabinets and airtight containers packed with a variety of leaves for food.

Even in harsh weather, Heo wandered into the mountains to get a hold of the right leaves for her insects. Through all this hard work, Heo earned the nickname “Moth Mom.”

Although Heo did receive a few tips about raising moths, the book was entirely done by herself. After collecting the larvae, Heo studied them using foreign research and checked classifications. Heo was also behind the camera when filming the metamorphosis.

“It takes about two to 10 months for a larva to develop into an imago. Naturally there are those that die in mid-process as well. There is a moth with a huge spot that I really hold onto dearly, and after five years, it finally succeeded in its eclosion,” Heo says.

“I believe that research on moths is lacking because people avoid studying natural sciences. My goal is to examine 2,000 kinds of moths until I’m as old as 80.”

After reading Heo’s book, Bae Yang-seob, a professor of biology at the University of Incheon, says, “I have so much respect for Heo who, despite being a homemaker, is doing all the work entomologists are supposed to be doing.”