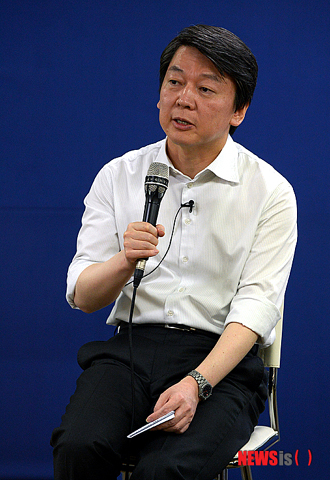 “Large corporations have to turn over a new leaf and on their own accord fulfill societal responsibility,” said Ahn at a cyber town hall meeting held earlier at his election headquarters in Gongpyeong-dong in Jongno District, central Seoul yesterday.

Jun Sung-in, economics professor at Hongik University, and Lee Bong-eui, a law professor at Seoul National University, described the platform at a press conference. The two are in charge of the so-called economic democratization policies for Ahn’s campaign.

The campaign pledged to establish a presidential advisory committee on chaebol reform and tackle the issue in a “comprehensive and methodical manner” yesterday.

The committee will pull together policies and data currently scattered around various governmental agencies and have the right to recommend legislation. The campaign recommended that the committee be headed by an independent civilian expert.

“The influence of the chaebol is becoming more extreme, but it is difficult to come up with effective policies because there is no ‘control tower’ that oversees policies on chaebol reform,” said Jun.

Reform legislation was promised within one year and the campaign said Ahn’s Blue House would release a report on chaebol reform yearly.

The day before, Moon Jae-in, presidential candidate of the opposition Democratic United Party, proposed that he and his two rivals come up with common positions on reforming the chaebol and start on legislation even before the election.

All three major presidential candidates - Ahn, Moon and the ruling Saenuri Party’s Park Geun-hye - agree that the chaebol-dominated economic system is outdated and brakes need to be put on conglomerates’ grip on the economy.

While the DUP supports the idea of imposing heavy taxes only on the top 1 percent income earners, Ahn stated in his bestseller “Ahn Cheol-soo’s Thoughts” that the middle and lower classes also have to pay more taxes for increased welfare.

Ahn will describe his platform on economic democratization on Sunday.