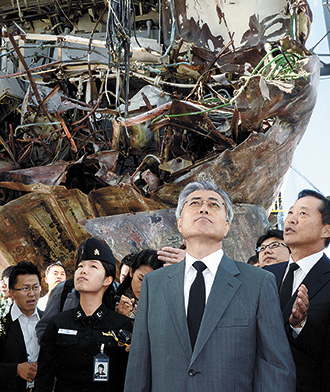 Moon Jae-in, foreground, looks yesterday at the wreck of the Cheonan warship, which South Korea says was torpedoed by North Korea in March 2010, displayed at the headquarters of the Navy’s Second Fleet in Pyeongtaek, Gyeonggi. [NEWSIS]

The ruling Saenuri Party piled on more allegations about late President Roh Moo-hyun’s denying the de facto inter-Korean maritime border at a 2007 summit in Pyongyang, obviously trying to make the issue work in its favor in the presidential race.

And it said the Democratic United Party’s presidential candidate Moon Jae-in, who was Roh’s chief of staff, must have known about Roh’s actions more than anyone else.

Party spokesman Lee Cheol-woo yesterday told reporters at the National Assembly that the former liberal president not only said he didn’t recognize the western inter-Korean sea border, but he prepared the comment in advance of the summit.

“There is suspicion that before the 2007 inter-Korean summit, a high-ranking Blue House official ordered the National Intelligence Service to ‘study how the North would react if we say we don’t recognize the NLL at the summit,’?” Lee said. 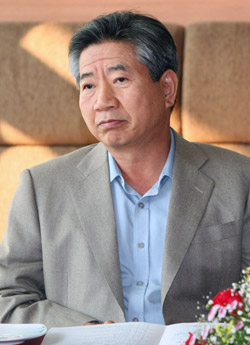 The Northern Limit Line, or NLL, is the de facto border in the Yellow Sea that South Korea recognizes and North Korea does not.

Kim’s decision has been criticized because he didn’t clearly claim Korea’s sovereignty over the islets in the treaty and therefore encouraged Japan’s territorial claim on the islands.

On Monday, Saenuri lawmaker Chung Moon-hun said at a parliamentary hearing that Roh had a closed-door meeting on the sidelines of the inter-Korean summit in Pyongyang in 2007 with then-North Korean leader Kim Jong-il. It took place on Oct. 3, 2007, at 3 p.m., Chung said, at the Paekhwawon state guest house.

In the meeting, according to Chung, Roh said he didn’t recognize the Northern Limit Line as an effective boundary between the two countries and described it as “a line unilaterally drawn by the United States which wanted to conquer more territory.”.

Chung said a transcript exists of the one-on-one secret dialogue because the conversation was recorded and North Korean officials shared the record with their South Korean counterparts.

On Tuesday, three members of the Roh administration who traveled with Roh to the 2007 summit denied all of Chung’s allegations.

Chung held a press conference again on Thursday and made another allegation.

“In the transcript, there’s a comment [by Roh] about the U.S. forces stationed in Korea,” Chung said. “As far as I know, Roh told Kim that he will ‘order all of the U.S. forces to leave [their bases in] Seoul and Gyeonggi.’

“After the [one-on-one] meeting, the two leaders moved to watch the Arirang Mass Games,” Chung said. “During the show, working-level officials of the two leaders wrote reports on the dialogue based on a transcript written by the North and some notes by the South. The South Korean reports are currently in the National Archives of Korea.”

The Saenuri Party’s committee investigating the allegations yesterday submitted an application to the National Assembly to launch a parliamentary probe into the allegations. It also plans to demand that the state-owned National Archives of Korea show all the reports of the 2007 summit.

Officially, Roh supported U.S. forces in Korea. In 2003, he signed a Korea-U.S. military agreement with then-U.S. President George W. Bush that would move American forces to a new base in Pyeongtaek, Gyeonggi.

At the time, he publicly said that he “agrees [with Bush] to be cautious in implementing the relocation of the U.S. forces in Korea by considering politics, economy and security in the Northeast Asia region.” He also said in 2002 during his presidential campaign, “U.S. forces will be needed to stay in the South even after the unification of the two Koreas.”

The DUP’s Moon said yesterday in a statement that he recognizes the NLL and will “secure it thoroughly” and “implement measures to ease tensions.” He also said he “won’t forgive any military provocation from the North” if he becomes president.

Moon yesterday paid a visit to the Second Fleet’s headquarters in Pyeongtaek, Gyeonggi, where the wreck of the warship Cheonan is on display. Moon said “it is a good thing” to display the wreck because it “could resolve questions on the sinking.”

Some liberal activists and politicians still say the government-led forensic investigation that concluded the sinking was an attack by Pyongyang in March 2010 was faked. North Korea denies the attack.

Moon denied the allegation by Chung and the Saenuri Party about the 2007 summit and Roh.

“We don’t need a parliamentary audit,” he said. “The unification minister and the National Intelligence Service chief can simply say whether there’s a transcript of the allegedly secret dialogue. And they should show me if there is.

“If the alleged transcript is true, I will take all responsibility for it,” Moon told reporters yesterday. “However, if it’s not true, Representative Chung, the Saenuri Party and candidate Park Geun-hye should take responsibility.”