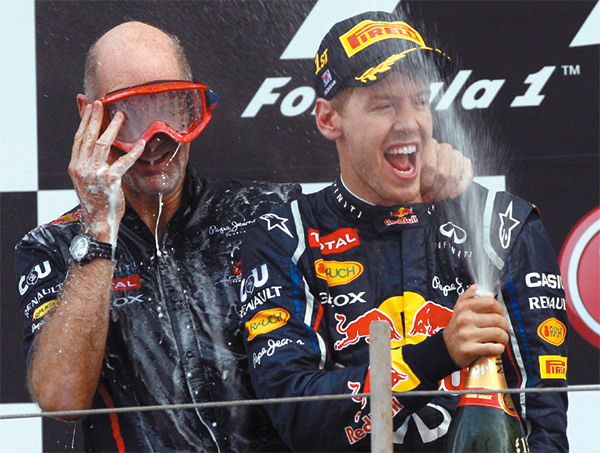 
YEONGAM, South Jeolla - Sebastian Vettel of Red Bull took over the Formula One lead from Spaniard Fernando Alonso of Ferrari yesterday as the defending champion continued his momentum in Asia and garnered a second consecutive Korean Grand Prix victory.

It was his third straight win after Suzuka, Japan, and Singapore, the only driver to do that this season. Vettel also won in Bahrain on April 20.

Vettel, who entered the Yeongam event four points behind Alonso, now has 215 points; the 31-year-old Alonso finished third yesterday and has 209 with four races remaining in the Formula One season.

“I am very, very happy,” Vettel said standing on top of the podium. “It’s a fantastic race.”

Vettel finished second and Webber first in Saturday’s qualifying round. Webber started at the pole, and he and Vettel dominated the race from the beginning. Vettel, who started second, passed Webber during the first lap and held the lead to the checkered flag.

Vettel said he hopes to carry his momentum through the next races, but takes nothing for granted. “A lot of things can happen,” he said.

If he wins the championship this season, Vettel will join Michael Schumacher and Juan Manuel Fangio as the only drivers to win at least three consecutive titles in the 62-year history of Formula One. Schumacher, the seven-time champion from Germany, won five straight titles from 2000 to 2004, while Fangio of Argentina won four straight from 1954 to 1957.

The next race will be in New Delhi on Oct. 28, followed by Abu Dhabi; Austin, Texas; and Sao Paulo. Alonso, who won the Formula One championship in 2005 and 2006, suffered a significant setback when he crashed in Suzuka and had to withdraw for the second time after being unable to complete the Belgium race on Sept. 2. In between, he finished third in both Singapore and Italy.

Alonso was positive about his third-place finish yesterday, saying his team is “moving in the right direction.” He said it was a strong performance for his Ferrari team, with teammate Felipe Massa finishing fourth.

“Six points behind, it opens possibilities for us,” he said.

Webber of Australia, who was third at Yeongam last year, finished with 152 points for the season, drawing closer to fourth-place driver Lewis Hamilton of McLaren, who added one point to 153 by finishing 10th. Third-place Kimi Raikkonen of Lotus finished fifth yesterday and stands at 167 points for the season.

Schumacher was 13th, failing to earn a point at Yeongam for the second year in a row. The 43-year-old German, who is planning to retire again at the end of the season, suffered a crash at Yeongam last year after a fourth-place finish in 2010, which was the best performance in his comeback year.

The Yeongam event began with concerns about poor race management, which caused disruptions in previous years.

But the organizers said they ensured a better experience this year with improvements in facilities and accommodations.

A total of 164,152 people attended races during the three-day event, including 86,259 spectators for yesterday’s final, the organizers said.

One contributing factor was world famous singer Psy, who waved the checkered flag. He also gave a one-hour concert on a stage set up after the race. A total of 15 K-pop singers also staged performances at the same venue Saturday.

On the sidelines, the Hello Mobile Super Race Championship 2012, the country’s biggest motorsport event, was also held, featuring a competition that featured 35 drivers and 15 teams competing in four classes.

The next Korean Grand Prix will be Oct. 4-6, 2013, as the 15th of 20 races on the Formula One calendar. The Formula One organization decided to alter next year’s schedule, moving the race in Suzuka, Japan, to the week after the Korean race.