Wyverns, Giants meet in rematch for a place in KBO Series

Wyverns, Giants meet in rematch for a place in KBO Series 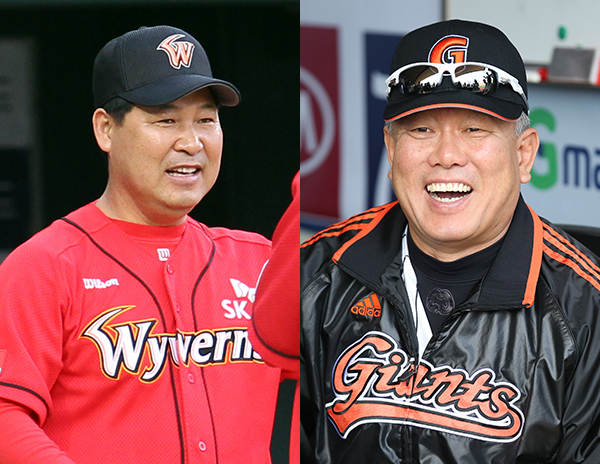 The two teams that clashed in the second round of the South Korean baseball playoffs last year will square off in a rematch starting this week.

Tomorrow, the SK Wyverns will host the Lotte Giants at Munhak Stadium in Incheon tomorrow night to open the second round series of the Korea Baseball Organization (KBO) playoffs. The Wyverns, by virtue of finishing second in the regular season, earned a bye to the best-of-five second round. The Giants, seeded fourth, eliminated the Doosan Bears in four games in the first round.

These two clubs also met in last year’s second round, and the Wyverns, then seeded No. 3, knocked off the second-seeded Giants in five games to reach the Korean Series.

The Wyverns have won three of the past five Korean Series, and they have reached a record five straight championship finals. With their core players still in the lineup, the Wyverns boast a wealth of postseason experience.

The Giants are in the playoffs for the fifth straight year, but they haven’t been to the Korean Series since 1999. The franchise’s last championship came in 1992.

Bullpens have been strengths for both teams this season. The Wyverns were 19-13 in one-run games, the best winning percentage in such situations in the KBO. The Giants, which until this season had been known for offense, put up the second-best bullpen earned run average (ERA) ever this season.

If the Giants are to get past the Wyverns, they will have to solve two left-handed relievers out of the SK bullpen.

Park usually takes care of the eighth inning, and hands it over to Jung Woo-ram in the ninth. Jung recorded 30 saves and a 2.20 ERA in his first full-season as the closer.

The Giants can stack their lineup with right-handed hitters, but Park and Jung have been almost as effective against righties as against lefties.

The Giants bullpen is led by Chong Tae-hyon, the former closer for SK. Hampered by injuries, Chong pitched in only 24 games in the second half of the season, giving up two runs in 23 1/3 innings. Incidentally, SK was the only KBO club to score off Chong.

He was named the most valuable player of the first round series after picking up a win and two saves in four scoreless innings. Chong appears to have supplanted Kim Sa-yool as the closer in the postseason. Kim earned a franchise-record 34 saves in the regular season, but fell out of favor with manager Yang Seung-ho with his late season swoon.

On offense, slugging third baseman Choi Jeong will lead the way for the Wyverns. He belted a career-high 26 home runs in the regular season, five of them against Lotte.

For Lotte, outfielder Son A-seop had a .382 batting average against SK pitching, along with 10 RBIs. Catcher Kang Min-ho, who sustained a left eye injury in the previous series when a bad hop on a throw from center field nailed him in the face, missed three games in the first round, but could be ready for the next round. He led the Giants with 15 RBIs against the Wyverns. Yonhap