Stone lantern in front of the Buseoksa Temple

Stone lantern in front of the Buseoksa Temple 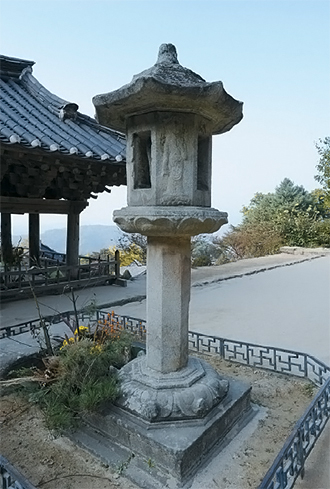 Name: Stone lantern in front of Muryangsujeon Hall of the Buseoksa Temple


A seokdeung (a stone lantern) stands for the light of Buddha, and is thus also called a gwangmyeongdeung (a light lantern).

It is usually set up in front of important structures such as a main temple or a pagoda. The hwasaseok (ignited upper part of the stone lantern) is at the center, with supporting stones under it and a stone roof on top. This stone lantern is representative of general stone lanterns of the Silla Era that are octagonal.

It is located in front of the Muryangsujeon Hall of the Buseoksa Temple. Designs are decoratively carved into the sides of the bottom stone, and there is a large stone lotus flower carved on the bottom to support the ganjuseok.

The ganjuseok is a typical octagonal pillar, and the thickness is proportional to the height. There is a full-bloomed lotus flower carved into the pillar to support the hwasaseok.

The octagonal hwasaseok has four openings and four elaborate carvings of Bodhisattva images. This is known as the most beautiful stone lantern of the Silla Era. It is praised for the exactness of the Bodhisattva images carved into four sides of the hwasaseok.