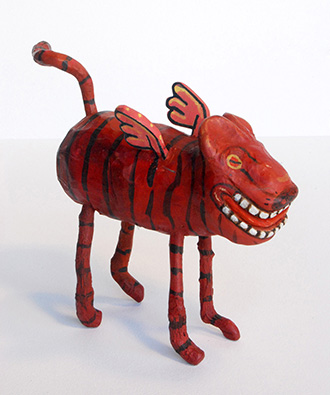 “Smiling Tiger” by Han Myeong-cheol Provided by the museum

Among Korea’s many unique museums is one dedicated to kkokdu, or funerary figurines. It opened in April 2010 in the bustling, artsy Daehangno area of central Seoul.

Since then, it has hosted seven exhibitions and been featured in The New York Times. And museum representatives participated in “All Eyes on Korea,” the 100-day cultural festival in London prior to the Olympics.

The Kkokdu Museum features about 20,000 figurines and funeral biers collected by Kim Ock-rang, the director.

Some kkokdu are clowns and acrobats; others are guards and maids. There are also phoenixes and dragons.

Currently, the museum is hosting an exhibition about tigers, which have inspired Korean storytellers for centuries.

The exhibition is titled “Ho Ho Ho, Laughing Tigers” and features 150 wooden tiger figures made by Han Myeong-cheol over the past 10 years.

Ho in Chinese characters can mean three things: good or favorable, tiger and calling or inviting.

“In many of Korea’s traditional folk tales, the tiger is portrayed as an evil figure that eats up a girl, or an animal that is strong but lacks wisdom,” said Kim Hwang-bin, a representative of the museum. “But the tiger figures made by Han are reborn as friendly figures, ones that laugh rather than roar.”

In addition, Han is known for his eco-friendly methods. He never cuts down trees or buys wood, using only what he finds on the ground.