Grand prix winner gets some style

Grand prix winner gets some style 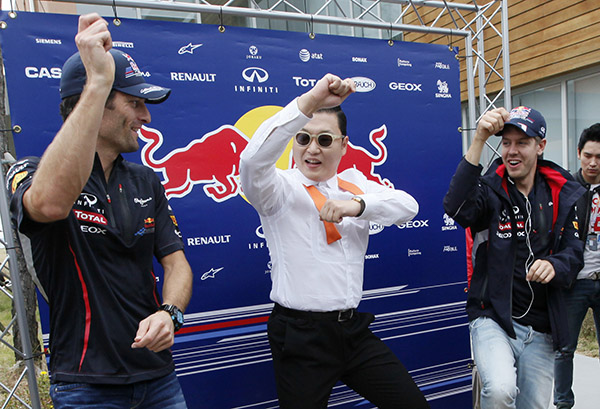 Before the race, when asked how he felt to have topped the music charts across the world, Psy said: “Well, this is unbelievable. I was not ready for this.” He then gave a lesson on how to do the dance to Vettel and his Red Bull teammate Mark Webber, who had the pole position for Saturday’s race.

“So one, two, three, four, then you .?.?.” he explained, moving his arms as if holding the reins of a horse. The trio then did the move briefly together, as dozens of photographers and fans swarmed around.

“Where are the sexy ladies?” Vettel asked Psy, a nod to the video of the song.

“No sexy ladies here, unfortunately,” Psy replied with a laugh, before he was whisked away by his phalanx of plain-clothes security men.