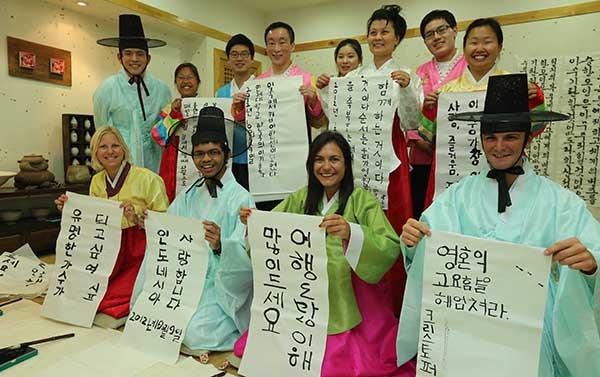 Foreign students who participated in the hangul writing contest hosted by Inje University show off their work on Hangul Day, which fell on Tuesday. [JoongAng Ilbo]


Psy has become a global phenomenon with “Gangnam Style” and his horse-trot dance. Although the song is in Korean, it’s gone viral all around the world, even though most people have no idea what the lyrics mean.
Some curious fans may have tried an online translator or a Google search of the lyrics to get some idea of what Psy is singing about.
There’s a segment of the song where he says, “If there is someone who runs faster than others, there is always another who can fly to beat them.” This is actually a Korean proverb, warning that no matter how fast, strong or smart you think you are, there will always be somebody better. Much like the English saying that “pride comes before the fall,” this proverb is a warning to not get too cocky.
In celebration of Hangul Day, which fell on Tuesday, this article covers some Korean proverbs commonly used in everyday life. They will enable you to explore the usage as well as the cultural, historical and social background of each expression.

Rice cake is a bit dry when eaten alone, so Koreans used to drink kimchi soup with it, as the cold, tangy soup helped the rice cake go down smoothly. If someone has a sip of kimchi juice and there is no one to give them rice cake, it means they are betting on something good happening when it’s more likely not to. When your friend has just bought a lottery ticket and is already planning on spending the prize money, you can tell them not to drink kimchi juice first. The English proverb, “Don’t count your chickens before they hatch,” has the same meaning.


‘Lay down a sickle and still not know the first letter of the Korean alphabet.’
(Nan-nohko giyeok-ja-doh moreunda)

The shape of a sickle is similar to giyeok, which is the first letter of the Korean alphabet. It means that someone is so dumb they can’t even begin the alphabet even when there’s a sickle sitting nearby. In English-speaking cultures, it can be said that one is so ignorant he doesn’t know his ABCs.


‘What makes the stew taste better is the soybean paste, not the earthen pot.’
(Ttukbaegi-boda jang mashida)

Ttukbaegi is a traditional earthen pot used to cook hot dishes such as deonjang jjigae, which is made of soybean paste. While Korean traditional pottery, including Goryeo celadon and white Baekje porcelain, exhibit delicate and sophisticated beauty, these earthenware bowls rather look rough and crude as they are not glazed and are a dull brown color. Food looks more delicious when served in a colorful dish, but fermented soybean paste should be cooked and served in ttukbaegi for the proper deep flavor.
Soybean paste is one of the essential ingredients in the everyday life of Koreans, and everybody knows the quality of it is more critical to great tasting food than the container it is served in. In this sense, Koreans came up with the proverb, implying the actual essence or nature of things means much more than the appearance, or that appearances can be deceptive. You shouldn’t judge a book by its cover.

Korean shamans are called mudang and some believe that they mediate between humans and spirits. For example, they may be called upon to exorcise a demon in an attempt to cure a client’s illness or to make her businesses thrive by performing a ritual dance on a sharp straw cutter.
Seon mudang means a novice shaman, and the proverb warns that an incompetent shaman can kill people, rather than help them. It explains how unskilled people who have little or no knowledge can ruin things or hurt others when they take matters into their hands and put the wheels in motion. Nothing is more dangerous than reckless confidence. That’s why people say “a little knowledge is a dangerous thing” in the West.


‘A dragon rises from a small stream.’
(Gaecheon-eh-seo yong nanda)

The dragon has long been considered an auspicious animal in the East, symbolizing success and good luck. They were often depicted as mighty creatures in the mythologies of Asian societies, representing high-profile figures like emperors. From this background, the dragon in the proverb can be translated as a very successful, important or influential person. Viewed as an animal with majestic influence, dragons were known to control water, including rain and clouds, and it is said that they often lived in rivers or oceans.
Given the historical and cultural background behind the dragon symbol, a dragon rising from the small stream of the proverb symbolizes a person of humble origins. It was unlikely for a great dragon to be born from a shallow stream, which implies humble family background. Just like the saying “from rags to riches,” the proverb is used to indicate the success of a person from a poor or uninspiring background.

‘Go to get rid of a lump and come back with another.’
(Hok tteryeoda hok buchinda)

It is the equivalent of “the biter is bitten” or “go for wool and come home shorn.” To understand the background of the proverb, you need to know a short Korean folktale.
Once upon a time, there was a woodcutter with a lump on his cheek. He was very poor but had a lovely singing voice. One day he was working hard on a mountain and didn’t realize how dark it had become. He decided to stay overnight in an empty hut and sang songs to ward off his fears. Suddenly, a gang of goblins appeared and asked where the nice sounds were coming from. The woodcutter said it came from his lump, so the goblins traded it for their magic club. The woodcutter became rich with the magic club, and another man with a lump in the village heard about the story and he went to the same mountain in hopes of also becoming rich. He met the same goblins, but they were angry since the lump they had gotten originally was useless. The goblins put that lump into the greedy man’s face, so he had to come back with a lump on both cheeks and nothing else.
Every language reflects the culture and traditions of the country where it’s spoken, far beyond anything you will learn from a dictionary or grammar book. Learning Korean proverbs is one of the ways to better understand the culture by comparing the similarities and differences with your own culture.
Now go out there and put the knowledge into practice! After all, “nothing ventured, nothing gained!”