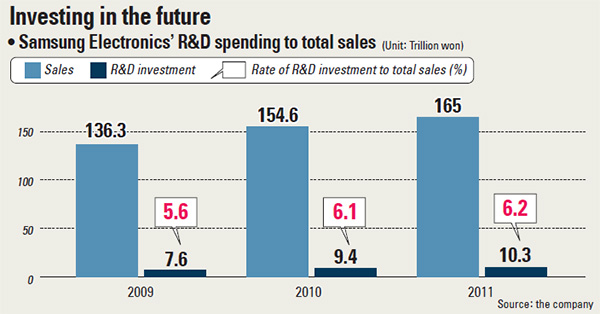 Samsung Electronics is gearing up for more R&D investment after it marked record earnings in the September quarter, at a time when most companies are tightening their budgets.

It is now building at total of five R&D complexes in Seoul and urban centers in Gyeonggi, including Suwon, Pyeongtaek and Hwaseong. They have a combined area of five million square meters (53.8 million square feet).

“We will expedite the investment process for our large-scale R&D projects as the economic slowdown is expected to continue next year,” a spokesman for the company said last week.

Three of the complexes under construction are expected to open next year. Two 25-story buildings in Suwon are due to follow suit in May, along with another one nearby focusing on electronic materials for five Samsung subsidiaries, including Samsung Electronics, Samsung SDI, Cheil Industries, Samsung Fine Chemicals and Samsung Corning Precision Materials.

A component research center that can produce parts for the technology developed in some of the aforementioned facilities will be completed in Hwaseong by the end of next year.

Three of the complexes house a total of 23,000 employees.

Samsung Electronics is preparing to research ways of producing core materials using its own technology to wean itself off foreign suppliers, with a focus on materials for electronic car batteries, organic light-emitting diodes (OLED) and photovoltaic energy.

“When all three centers are constructed, they will constitute Samsung’s version of Silicon Valley, producing core materials and components for finished goods in the areas around Suwon and Hwaseong,” said one company employee.

The Woomyeondong R&D Center in Seocho, southern Seoul, marks the company’s first R&D center in the capital, where Samsung Electronics will focus on researching product design and software. The ground was broken last month for six 10-story buildings.

In total, 1.2 trillion won ($1.08 billion) has been injected into purchasing the land and the overall construction. Around 10,000 researchers will work at the center when it is completed.

Godeok Industrial Complex in Pyeongtaek, Gyeonggi, will be the final complex to be completed in December 2015. Here, the company will explore ideas for new business projects that can bring future growth momentum to Samsung Group.

When the Godeok complex is completed, it will generate 13.12 trillion won worth of production and bring 4.89 trillion won worth of added value to the local economy, according to Lee Won-bin, a policy researcher at the presidential commission for regional development. It will also require the hiring of 72,000 new employees.

“Historically speaking, the company tends to pave the way for long-term growth by investing in R&D when the economy is sluggish in order to build momentum for future growth,” said a company official.

After Samsung Electronics marked record sales of more than 50 trillion won and operating profit of over 8 trillion won in Q3, concern is brewing that the company has already peaked.