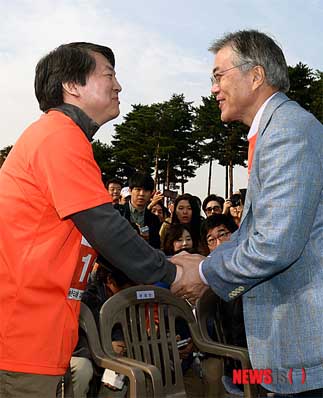 The proposal appeared to be Moon’s first official response to Ahn’s demand of the DUP’s political reform as a precondition for their negotiation to pick one candidate to represent the liberals in the December presidential election.

“Moon thinks it is crucial for him to consolidate the candidacy with Ahn to win the presidential election and reform politics,” said Representative Jin Sung-joon, spokesman for Moon’s campaign.

“Moon thinks a three-step proposal recommended by Professor Cho Kuk is very practical and realistic, so Moon accepts it.”

Cho, a law professor at Seoul National University, is a famous liberal icon. He has recommended that Moon form a joint political reform committee with Ahn as the first step for the two candidates to pick one of them to represent the liberals to increase their chances against Park Geun-hye, candidate for the conservative ruling Saenuri Party. Cho recommended they jointly establish policies and a platform as the next step and negotiate the candidacy in the final step.

“If Ahn thinks it is inappropriate to have the discussion on the candidate consolidation right now,” Jin said, “we can start the political reform committee without that precondition.”

Jin also proposed that Cho should be appointed as the committee chairman, but added that the Moon campaign had no prior consultation with Cho about the matter.

Moon’s proposal appeared to be an answer to Ahn’s precondition for candidate consolidation negotiation.

After announcing his presidential bid as an independent candidate, Ahn said he will only talk about unifying the liberal candidacies with Moon after a “true political reform” of the DUP. He, however, did not say what the DUP must do to satisfy his demand.

On Saturday, Moon pressured Ahn to join the largest opposition party and compete with him in a run-off. In a meeting with university students, Moon said, “Ahn’s joining the DUP and competing with me will be the easiest way.”

“Some may say that I am the DUP candidate, so it will be disadvantageous to Ahn,” Moon said. “But I can give up my privileges as the presidential candidate.”

Moon also said he is willing to talk with Ahn to define the terms of their competition inside the DUP to ensure fairness.

Ahn, however, flatly turned down Moon’s idea that he join the DUP. “I have already said this many times, and I hope he will understand what the real important goal is,” Ahn said yesterday.