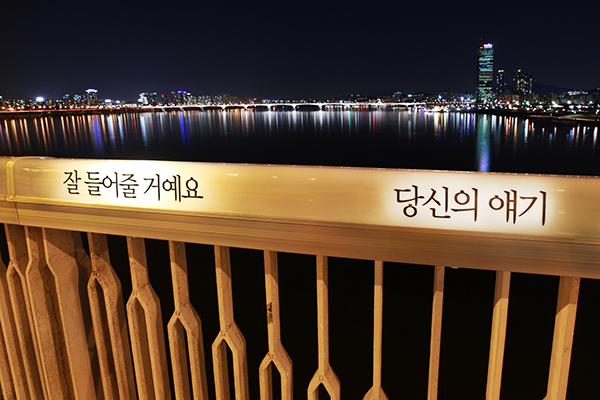 A comforting message to potential jumpers, “We will listen to your story with empathy,” is posted on the guardrails of Mapo Bridge, or “Suicide Bridge.” Sensors in the railing turn lights on when passersby walk near. By Park Sang-moon


The Mapo Bridge in western Seoul is an icon of the nighttime city landscape. The view to the south when standing on the northern side of the bridge includes the country’s National Assembly and the high-rise 63 City Building, a 63-story gold-colored building that was once a source of pride for Koreans as it was briefly the tallest building in Asia and a symbol of the country’s fast economic development.

The 1.4-kilometer (0.87-mile) bridge, where many outdoor enthusiasts visit to enjoy the fresh air, has a morbid nickname: “Suicide Bridge.”

In the past five years, 1,301 people jumped off bridges over the Han River. Among the 31 bridges, 108 took the 60-foot leap off the Mapo Bridge, giving it the infamous title. Of the total, 48 died. 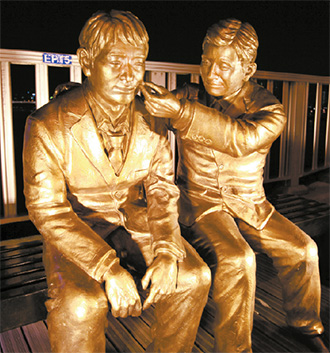 This statue of a grandfatherly man is seen pinching the cheek of a younger man on Mapo Bridge in western Seoul. The city government erected the statue in an attempt to impart hope to anyone who goes onto the bridge in order to commit suicide. By Park Sang-moon

“A number of those who contemplate taking their own lives choose the Mapo Bridge because of its proximity to the metropolitan centers, as it connects Yeouido with northern Seoul, as well as its proximity to subway stations,” said Park Haung-Jae, deputy director at the urban safety office of the Seoul Metropolitan Government.

“The bridge’s proximity to financial institutions is also believed to be a contributing factor to the high number of suicide attempts as financial loss is one of the main causes for suicide.”

In an effort to shed the bridge’s image and address people’s anguish to keep them from ending their lives, the Seoul city government unveiled special signs on Sept. 26 along the guardrails of the bridge after a year of preparations.

“The best part of your life is yet to come,” or “Why don’t you talk about your problems?” are among the messages on the bridge’s railings. The city office also erected a statue of two men dressed in suits.

One of the statues, looking kind and fatherly, is seen pinching the cheek of a younger, disheveled businessman. The messages were chosen by psychiatrists and are intended to relax the suicidal with an attempt at humor such as “Why don’t we go to the noraebang [singing room] right now to get rid of stress?”

The government also installed movement sensors along the railing, so when passersby walk along the bridge, lights turn on. There are also four emergency phone boxes alongside the bridge, which will give distressed people direct access to an anonymous suicide hotline and the emergency service 119.

“Reaction from citizens on the installments has been positive. And there have been no suicide attempts reported since the launching of the campaign on Sept. 26,” said Park of the city office.

“We will evaluate the effects of the modifications on cutting suicide attempts and determine whether we should implement similar measures at other Han River bridges after a one-year run.”

Modifications made to the bridge followed efforts by the city office to reduce suicide attempts by installing screen doors on subways, which were built to prevent people from jumping in front of oncoming trains.

Thanks to the screen doors, first introduced in 2008, the number of suicide attempts on subways plummeted to five last year from 62 in 2007.

Korea, known for its ultracompetitive society, has had the highest suicide rate among the 34 nations in the OECD for the past eight years.

It is reported that almost 43.6 people choose to end their lives every day, according to government data. It is also estimated that an average of 31.7 people per 100,000 ended their lives in 2011, a figure that is nearly three times higher than the average of 12.9 of other member states in the OECD.

A 21-year-old private in the Air Force, who was on leave from his mandatory two-year military duty, leapt from the Seogang Bridge in Mapo District on Sept. 3, becoming the 53rd person to die from jumping off a bridge this year.

“Korea’s fast economic rise has led many to perceive money as the foremost essential value in society while having forgotten that there are many other important values to achieve,” Park Young-ki, head of the Korea Suicide Prevention Union who participated in the Mapo Bridge modifications, told the Korea JoongAng Daily.

“It is not unusual for Koreans to ask their family members or friends how much they make a year, sometimes even before knowing what they do. Society forces everyone to have an identical value - securing wealth.”

Park added that, as a result, those who feel they have failed financially are at risk of turning to suicide.

“The ongoing string of suicide attempts calls for a fundamental shift in perception of values that should be embraced. Society as a whole should be more open to accepting a variety of values and recognize it is not abnormal for people to pursue different values in their lives.”