Tea time at two: Exhibits at Ewha, Arumjigi focus on the tradition

Tea time at two: Exhibits at Ewha, Arumjigi focus on the tradition 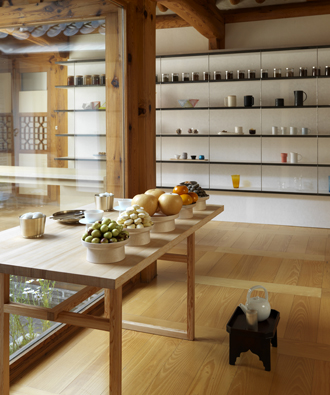 “Becoming One with Tea,” an exhibit at the Arumjigi Culture Keepers Foundation in Anguk-dong, central Seoul, is an authentic spot to taste and learn about different teas and traditional Korean dining. Provided by the foundation

While Western coffeehouse franchises are ubiquitous in Korean metropolises today and offer an easy route to a warm cup of tea, there is a much more authentic option that allows one to enjoy and learn about the different bases and herbs at the Arumjigi Culture Keepers Foundation.

The Arumjigi center is a modest, beautiful hanok, or traditional Korean house, in Anguk-dong, central Seoul. It’s currently holding an exhibition dedicated to tea drinking and the artwork inspired by the beverage.

Titled “Becoming One with Tea,” the exhibition is the foundation’s third based on Korea’s traditional dining culture. In 2006, it held “Korean Food Vessels and Table Settings,” with the “Dosirak Lunchbox: Joyful Meal” show coming three years later.

The Arumjigi Culture Keepers Foundation is a nonprofit organization devoted to protecting and preserving Korea’s traditional culture and beauty. Its hanok used to be part of the 130-year-old residence of late President Yun Po-sun.

Five teams of designers that include Kim Kyeong-eun and Kim Jong-hwan as well as 30 potters, such as Kang Woong-ki, Ko Bo-hyeong and Ko Hee-suk, have come up with modern-day tea sets and tableware for the event. 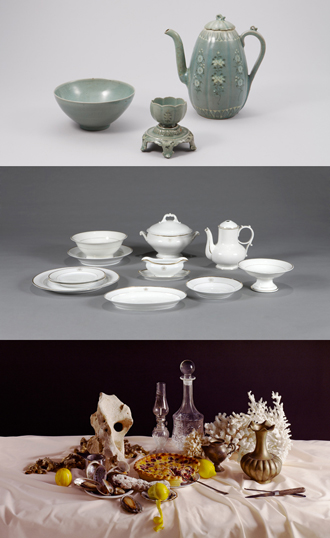 Works of art inspired by Korea’s traditional dining culture are on display at the Ewha Womans University Museum. The items on display include (from top) a celadon tea set from the 12th and 13th centuries, a Western-style set used in Korean palaces from the early 20th century and the “Steal Life Series 03” by Ham Kyung-ah. Provided by the museum

“When I think of our tea - Korean tea - I think of barley tea that [my mother] would boil in a nickel silver kettle,” said potter Kim Jong-hwan, who is known for the so-called “moon cups” that are inspired by makgeolli (traditional Korean rice wine) glasses.

Artist Song Seung-yong presents a teacup connected with a diffuser, while Kim Kyeong-eun crafted Lego-style tableware that can be assembled into lunch boxes, tables or other dining utensils for the exhibit.

And it’s not just the Arumjigi Foundation that is devoting the cool fall months to tea and traditional Korean dining. The Ewha Womans University Museum is also holding an exhibition titled “The Aesthetics of Table Setting.” It showcases relics from Korea’s past dynasties that demonstrate their respective dining cultures.

“Mankind has added beauty and technique to the dietary life that repeats every day and has created unique dining cultures” said Oh Jin-kyeong, the museum’s director. “A look into how dining cultures have changed over time is a good way to study the cultures of certain regions.”

The exhibition consists of two parts: one is taking place in a special exhibition hall and is subtitled “Served with Decorum and Finesse,” and the other is underway in the modern art gallery and subtitled “Meals and Tables in Contemporary Art.”

The first part displays the changing aesthetics of Korean table settings across time and the connection to social status, ranging from those used by the royal and imperial families and the former presidents to those used by ordinary people, dating from the Goryeo Dynasty to the present. The key exhibit includes celadon tea sets from the 12th and 13th centuries.

In the second part, visitors can see various modern and contemporary works of art inspired by dining. They include paintings and photographs that depict food in humorous and playful ways as well as installation works that combine tableware and state-of-art technology.

“The Aesthetics of Table Setting” runs until Dec. 8.

The museum is closed every Sunday.