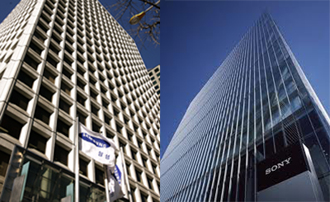 I recently watched a lecture by Seoul National University Prof. Kim Hyun-chul, author of “Korea’s Imperial Management versus Japan’s Lordly Management.” In comparing the traits of Korean and Japanese corporate management - mostly referring to large business groups - the economist characterized Korea’s as imperial emperor-like rule while that of Japan as feudal lord in the shogunate period. The Korean hereditary owner has omnipotent power over his corporate empire, while a Japanese controls his corporate estate but does not actively interfere.

Just years back, the Japanese thought that the only things that Koreans could sell in their country were soju, kimchi and women. But it is a completely different story today. The popularity of Korean pop culture is part of the reason.

But the definitive blow was Samsung, according to Kim. In the second half of 2009, Samsung Electronics netted a profit exceeding that of nine Japanese electronics companies combined, including Sony, Panasonic and Toshiba, household names that dominated the global electronics market for the last four decades.

Moreover, Japan has been a teacher to the Korean electronics industry. The Korean manufacturers were incubated with Japanese capital and technology in the 1950s and 60s. And the Japanese bore great pride in their electronics industry. They believed they lost World War II because they lagged behind Americans in electronics technology. They poured immense capital into fostering industrial giants in the field since the 1950s. They were dumbfounded and crushed by Samsung’s staggering performance with the media hyping a collapse in the electronics sector and vigilance against Korea, Inc.

Japan began to pore over the reasons. There was little difference in corporate structure. Like Japan’s keiretsu system, Korea, Inc. evolved around chaebol. But Japanese conglomerates owned more affiliates than Koreans. Japanese business groups owned over 100 affiliates, while the largest in Korea owned 60 to 70, at most.

The key difference, according to Professor Kim, can be found in the management style - or authoritative power over corporate governance which is in Korea and absent in Japan. American and European experts agree with this observation. Korean companies weathered and quickly recovered from the 2008 global financial crisis thanks to decisive and farsighted leadership that allowed persistent long-term investments. It is owed to Korea’s unique family-run ownership structure. What others outside recognize as Korea’s corporate strength, at home it is heavily hit upon that it should be reformed.

There is no global standard in corporate governance. Business groups and hereditary ownership are not unique in Korean corporate culture. They are common in other economies. Independent corporate and professional chief executive systems may not be the only right answer.

But the first thing we associate with the topic of chaebol reform is ownership structure. The argument is that a person with a 1 percent stake must not exercise 100 percent management control. It is the gist of the chaebol reform platform by Moon Jae-in, candidate for the main opposition Democratic United Party.

Other candidates are more or less the same in chaebol bashing. When they talk about overhauling chaebol, the first things they bring up are a revival of the cap on total equity investment in affiliates and bans on cross-shareholding and the industrial capital’s investment in the financial sector.

Of course, the current chaebol system leaves much to be desired. The predatory and greedy nature of chaebol must be reined in. An economy cannot be viable without altruism and a conscience. Unfair and top-down business transactions between large and small companies must be fixed.

Such unfair business practices exist beyond the Korean chaebol circle. Apple comes under fire for mistreating Foxconn, its Chinese assembler of iPhones. It is a universal conundrum between large companies and its suppliers. Unfair competition and business practices, however, are not excusable. There is no reason why memory chip-making and automaking business groups cannot try the bakery business.

Yet, they would be better off keeping their feet out of back-street businesses. There are gentlemanly rules and taboos in the corporate field by which the stronger players should abide. Justice must also be strengthened and applied strictly so that owners of conglomerates and their families do not use their businesses to fatten their personal wealth.

But chaebol reforms should stop at restricting unfair business practices, law bending and unfair pursuit of self-interest by owner families. We should not undermine the corporate strength of decisive and concentrated leadership.

Chaebol reform should not focus on dismantling the family-run ownership structure. It is neither effective nor relevant to economic justice. Banning cross-affiliate investment would not help ease wealth polarization. We may end up losing something bigger.