World Bank to open a Seoul office next year

World Bank to open a Seoul office next year 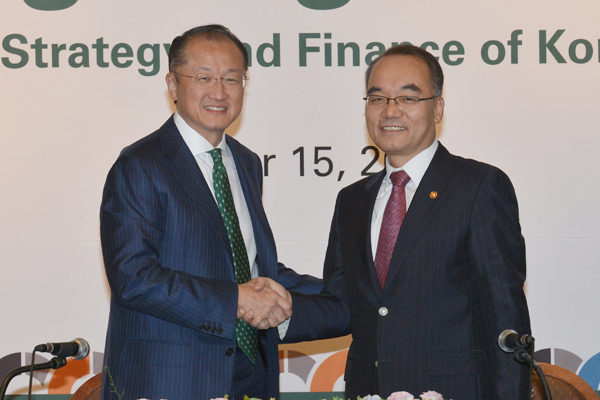 
The World Bank announced yesterday that it will open an office in Korea next year to step up joint efforts to find development solutions for developing countries.

This will be the first international financial institution to establish a branch in Korea. A possible candidate for the home of the World Bank office is Songdo International Business District in Incheon.

“The office will provide a platform for us to work together and give that work an increasing national, regional and global profile,” World Bank President Jim Yong Kim said at a press conference held in Seoul yesterday.

Korea’s Ministry of Strategy and Finance also agreed to launch a $90 million fund with the global lender to support emerging countries’ development.

Kim urged Korea to share its experience of the 1997 Asian financial crisis, and gave his own memories of it.

Jobs and solidarity are the two most important things, he said.

“First, jobs are not just about income, but about dignity and social cohesion,” he said. “The most important lesson from the 1997 crisis is to tackle it quickly and to have kind of solidarity like the Koreans showed by taking off their jewelry and donating them to raise $1 billion at the time.

“We must do what it takes to restore confidence and restore growth, so we get the private sector moving again to provide the jobs that everybody wants,” he added.

“At a time of global uncertainty, there’s an even greater sense of urgency to help developing countries tackle their challenges to reduce poverty and create greater prosperity for their people,” Kim told reporters.

“Korea’s experience in sustainable development, providing efficient infrastructure and services to improve the lives of its people, combined with its transition to a dynamic knowledge economy, provides lessons for developing countries,” he said.

The Korean-born World Bank president said the new office “would help share Korea’s development success” and its “expertise” in managing the 1997 Asian financial crisis and the recent 2008 global financial crisis.