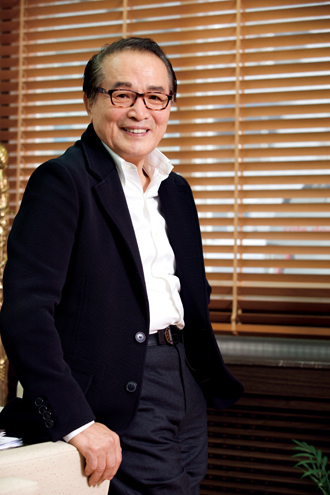 Actor Shin Young-kyun could have lived an easy life, but the dental school graduate wanted to be an actor.

From a king to a servant, Shin portrayed Korean men on the silver screen for 18 years. From his 1960 debut film “Widow” to his last film “Flowers and Birds” in 1978, Shin did 317 films in genres from war to melodrama to period dramas.

Sick and tired of censorship in the 1970s, however, Shin decided to stop acting. He led the Federation of Artistic & Cultural Organizations of Korea, one of the largest groups of Korean artists, in early 1980s and was a two-term lawmaker starting in the late 1990s.

“I didn’t do those works out of political ambition. It was one way for me to gain clout and help my artist friends,” Shin said during an interview with the JoongAng Sunday.

In 2010, he donated his Myungbo Art Hall in Seoul and the Sinyoung Cinema Museum on Jeju Island, worth 50 billion won ($45 million), to establish the Shin Young Kyun Arts and Cultural Foundation. The foundation supports the Korean film industry in a variety of ways, including scholarships, youth camps and a 100 million won annual prize.

“You loved me for what I did,” the 84-year-old Shin said during a ceremony presenting him with the Hermes Director’s Chair award worth some 15 million won at the Busan International Film Festival.

“Now what I can do is return your love by supporting the nation’s art and film industry, which I believe is one way to make society better.” 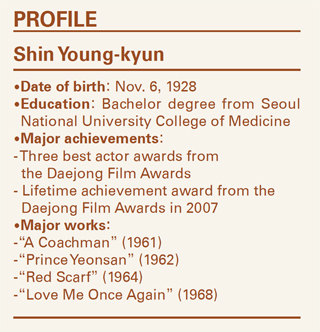 Q. Korean cinema has come a long way compared to 1970s and 1980s. Movies are getting rave reviews overseas and some Korean directors also broke into Hollywood. What do you think about a huge leap of Korean films? Do you still watch many?

A. I try to watch as many Korean films as I can. Most recently, I saw “Unbowed” (2011) and “War of the Arrows” (2011). I have a list of films that I would love to watch in the near future. I don’t want to miss “Pieta,” which won a top award at Venice Film Festival, and “The Thieves” which attracted 10 million viewers. “Gwanghae: The Man Who Became the King,” where Lee Byung-hun plays a double role, is also on my list.

Personally, I’m so proud of director Kim Ki-duk (“Pieta”). I also have a special memory of the Berlin International Film Festival as “A Coachman” (1961), which I starred in, received the Silver Berlin Bear award. But Kim received top awards from the world’s major three film festivals, a feat to be sure. I’d like to meet him in person and congratulate him.

You’ve been away from the film scene, but some of your peers are still working hard. For example, actress Yun Jung-hee came back to the screen after 15 years with the award-winning “Poetry” (2010). Do you plan to make a comeback?

Yun always tells me that “We should do a film together” whenever we run into each other. In fact, I still receive scripts. I recently got to know someone who was working on a screenplay about a man who misses his wife living up in the North. He said he was writing the story imagining me in the lead role. I told him that I would accept his offer if the story is good enough. If it is a good story, I don’t care whether it is a lead role or support role. 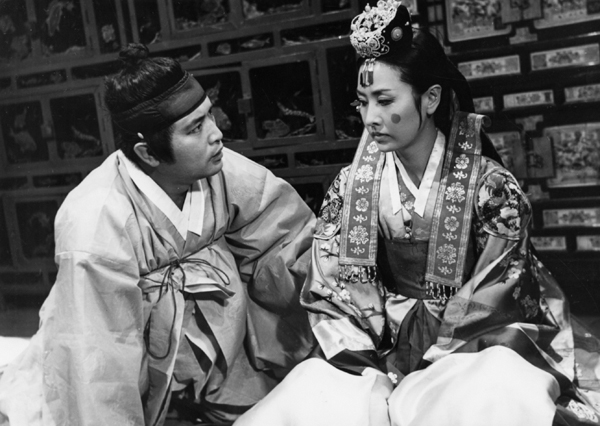 
You’ve starred in more than 300 films. If you had to pick the most memorable one, which would it be?

Among my many works, films that brought me awards, such as “Prince Yeonsan” (1962), are special. Up-and-coming actors of the time Kim Jin-kyu and Choi Mu-ryong wanted to be in the film. But I won the lead role. I was so excited about playing the role I memorized all the lines from beginning to the end. I didn’t have to do that because back then dialogues were dubbed after filming.

Why did you announce your retirement at the age of 50?

Film censorship was way too harsh and I didn’t feel like I wanted to act under such circumstances. For actors, the day we die is the day we retire, I believe now.

Although I once worked as a lawmaker and was responsible for the association of artists, I think those works have something to do with my acting career. I didn’t do those works out of political ambition. It was one way for me to gain clout and help my artist friends. 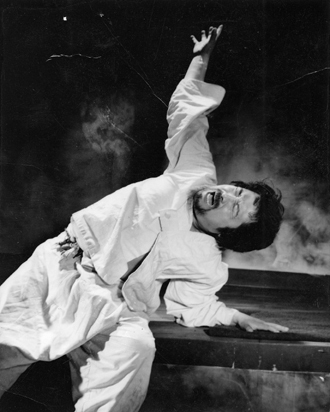 You recently played a supporting role in a play. What made you step onto the stage again?

It was the first play staged by a theater community of Seoul National University. My role was a Roman Catholic priest. Actor Lee Soon-jae recommended me to play the role, but I wasn’t willing to do it because I wasn’t so sure that I could act again. My wife also told me not to do it if I was stressed out because of the offer. When I was thinking about the role, an article came out that I was going to be part of the play. I had to accept the offer because of the article. [laughs] I had to memorize lines day and night by sleeping less. It was a nerve-wracking experience, but younger actors and actresses like Ahn Sung-ki, Lee Young-ae and Jeon Do-yeon came to see the play. They backed me up a lot.

[Lee Soon-jae and Shin attended Seoul National University together. Lee is also a veteran actor who is still working at age 77.]

Do you still keep in touch with younger actors and actresses?

I have to contact them through their managers, and that makes it hard to meet them in person. If I can reach them easily, I’d love to invite them over to film-related parties and mingle with them, but reaching them itself is very hard these days. And it puts some distance between old and young actors. 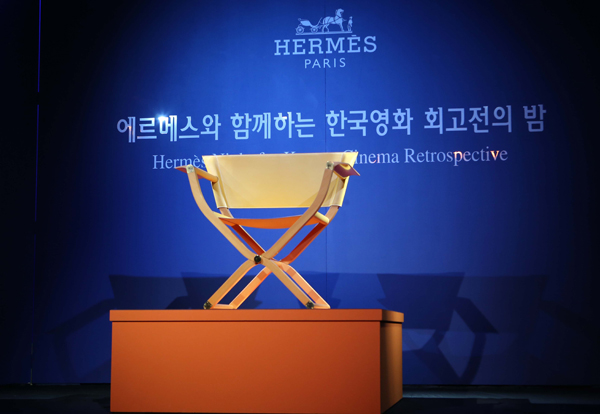 The Hermes Director’s Chair award presented to Shin during the Korean Cinema Retrospective segment at this year’s Busan International Film Festival. Shin Young-kyun, 84, serves as a director of the nation’s longest-running Daejong Film Awards and has donated 50 billion (45 million dollar) worth of property to establish a foundation to promote film in Korea and support actors and actresses in need. [JoongAng Ilbo]


Let’s talk about the nation’s biggest film award. Many changes were added to the Daejong Film Awards recently. The award was highly dependent on government funding but now the award is operated by a group of film industry people, and it is not influential as it used be after a couple of scandals. You’ve been designated as a director of the award that will be announced later this month.

The award is special to me in many ways. I received the first best actor award at the inaugural ceremony back in 1962. As a new director, I want to bring back the Daejong Awards’ old glory.

I think the biggest issue the award faces now is conflicts between current and previous members. In order to grow this film festival, I need both parties. Thus, I asked for help from influential figures: director Im Kwon-taek, Kim Dong-ho, the honorary festival director of Busan International Film Festival, and actor Ahn Sung-ki. I hope everything will get better.

I think this is the last job that will be given to me. I hope I can contribute to nurturing the festival so that it will be able to stand next to the Academy Awards.

You’ve donated 50 billion won worth of properties to society. How are things going regarding your charitable activities?

Myungbo Art Hall, which used to be Myungbo Theater, is an iconic venue in the nation’s film industry, as the theater played a central role in screening Korean films in the 1970s and 1980s. I once received an offer to sell the theater for 50 billion won, but I turned it down.