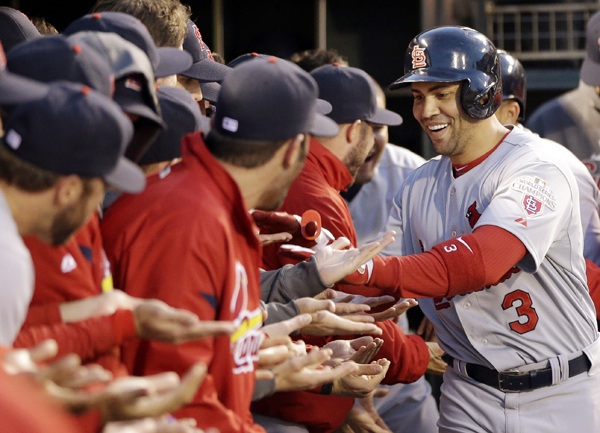 Carlos Beltran (3) of the St. Louis Cardinals returns to a delighted dugout after hitting a two-run home run in the fourth inning Sunday against the San Francisco Giants. The Cardinals won 6-4. [AP/YONHAP]


The revitalized St. Louis Cardinals made full use of their bullpen to hold off the San Francisco Giants for a 6-4 road victory in the opening game of the National League Championship Series on Sunday.

The defending World Series champions rallied from a 6-0 deficit in a Game Five decider against Washington on Friday, but this time it was their own six-run lead was threatened.

St. Louis uses six relievers, who combined for 5 1/3 scoreless innings to finish off a game that had looked to be slipping away when starter Lance Lynn allowed four runs in the bottom of the fourth.

“Those guys have been outstanding for us, hats off to the bullpen tonight,” said St. Louis second baseman Daniel Descalso. “A couple big swings, that was basically the difference.”

David Freese blasted a two-run homer in the second and Carlos Beltran added a two-run shot in the top of the fourth to sting an AT&T Park crowd that had cheered him on as one of their own just last season.

“I understand that they’re not going to root for me, but at the same time I’m here to win a championship,” Beltran said after his 14th career playoff homer and third this postseason.

“It was a good day for me (but) the reason why we’re here is because of our bullpen.”

The Giants roared back in the bottom of the fourth to chase Lynn, stringing together four two-out hits, including Gregor Blanco’s two-run triple.

In a matchup between the past two World Series champions, Game 2 is in San Francisco on Monday when the home team will send Ryan Vogelsong to the mound against Chris Carpenter.

On Sunday, Edward Mujica struck out the side in the seventh and was credited with the win and Jason Motte picked up the save in the ninth.

In New York, Anibal Sanchez and Phil Coke combined on a four-hit shutout as the Detroit Tigers stifled the withering New York Yankees attack for a 3-0 win in the American League Championship Series.

Sanchez held the Yankees to three hits in seven innings and lefty Coke went the last two innings, giving the Tigers a 2-0 lead in the best-of-seven series that resumes Tuesday in Detroit.

The anemic offensive showing by a Yankees lineup missing captain Derek Jeter, who broke his ankle in Saturday’s defeat, spoiled a strong outing by New York starter Hiroki Kuroda, who was perfect through five innings.

Quintin Berry scored the first run of the game on a ground out by Delmon Young after leading off the seventh inning with a double that hopped over the wall in center.

Detroit added two more runs in the eighth on RBI singles by Avisail Garcia and Miguel Cabrera, both following a disputed call at second base that would have ended the inning and led to the ejection of Yankees manager Joe Girardi.

Girard later issued a plea for wider use of replay. “It’s frustrating. In this day and age when we have instant replay available to us, it’s got to change.”