The Seoul government has declared war on the Korean unit of U.S. retail giant Costco Wholesale over operating on Sundays.

The U.S. retailer refuses to comply with the city government’s demand to close its doors on Sundays. This is supposed to benefit mom and pop shops in the city, although Costco outlets are far from markets or retail centers.

Costco has opened its stores every Sunday since September 9, when big stores were ordered to close on the second and fourth Sunday of every month.

So the city government on Wednesday and Sunday deployed officials to the three Costco branches -- Yangpyeong, Yangjae and Sangbong -- to see if they could find other ways to shut them down.

The officials found 14 violations such as a problem with emergency lighting and a violation of meat safety standards.

According to the Public Health Control Act, the government can shut them down for a maximum of seven days for those violations.

The government announced Sunday that the Yangjae outlet will be shut down for five days, although the timing hasn’t been decided. Sangbong will be shut for a week.

Earlier this year, some local courts sided with large discount chains such as E-Mart, Homeplus and Lotte Mart saying they could open on Sundays. Those rulings are being appealed at a municipal court.

Costco argues that it should be allowed to open on Sundays even though it hasn’t taken the city to court. 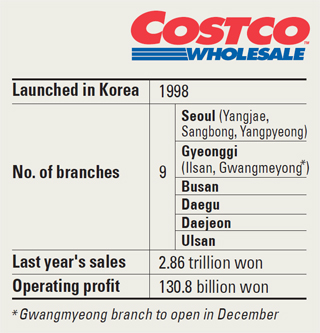 However, of 375 discount chain stores nationwide, 42 stores closed last Sunday in areas such as Gangseo district in northwest of Seoul, Suseong-district, Dalseo-district and Dong-district of Daegu, North Gyeongasang as they await the ruling of the appeals court.

After the second inspection Sunday, Costco filed a lawsuit in the Seoul Administrative Court yesterday against the heads of Jungnang-gu Office, Seocho-gu Office and Yeongdeungpo-gu Office, according to legal profession here. The suit asks for the no-operating-on-Sunday ordinance to be nullified.

Costco didn’t answer calls from the Korea JoongAng Daily yesterday, but Yonhap News Agency quoted the company as saying, “Preventing the operations of large retailers from midnight till 8 a.m., as well as completely closing stores on second and fourth Sunday of every month, is an illegal application of the Distribution Industry Development Act, and is an abuse of discretionary power of the administrative office.”