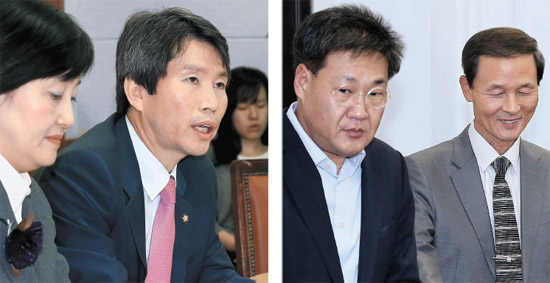 The campaign of the Democratic United Party’s Moon Jae-in yesterday decided to ask the prosecution to investigate a Saenuri lawmaker for “defaming” the late President Roh Moo-hyun with his claim of a secret dialogue that occurred during the 2007 inter-Korean summit.

“To end the obsolete practice of malicious propaganda and to reform politics, we have decided to respond with a resolute measure,” said DUP Representative Jin Sung-joon, spokesman of Moon’s campaign. 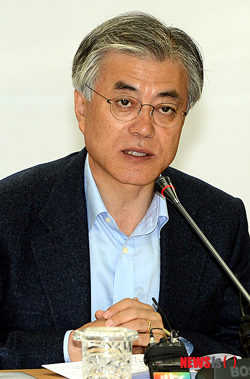 “We will soon file a petition against Representative Chung Moon-hun after consulting with legal advisers of the camp.”

Moon served as the presidential chief of staff of the Roh Blue House from March 2007 until February 2008 and accompanied Roh to Pyongyang for the October 2007 inter-Korean summit.

Chung made a bombshell revelation last week by claiming that Roh had told his North Korean counterpart Kim Jong-il during the 2007 summit in Pyongyang that he didn’t recognize the inter-Korean maritime border drawn up after the Korean War as an effective boundary between the two Koreas.

Chung, who worked for the Lee Myung-bak Blue House’s unification affairs secretary from 2009 to 2010, told the National Assembly that a transcript of a secret dialogue between Roh and Kim during the summit exists.

Chung also made another revelation Friday that Roh promised to Kim that Korea would move all U.S. troops out of the capital region.

After Chung’s claims were used by the Saenuri Party and the campaign of its presidential candidate, Park Geun-hye, to attack Moon, top security officials who worked in the Roh government, including former National Intelligence Service chief Kim Man-bok, refuted the allegations. They also said there was no one-on-one meeting between the two late leaders. No secret deals, therefore, were reached at the summit, they said, and there is no transcript.

The Moon campaign went a step further yesterday and made clear that it has every intention of fighting the Saenuri Party on this matter. Jin, the campaign’s spokesman, said yesterday the legal team will discuss specific charges to be brought against Chung, such as defamation of the late president and leaking of confidential information obtained in the line of duty.

Moon also talked about the issue in detail. A transcript of the two leaders’ dialogue at the summit, accompanied by their aides, was created by the National Intelligence Service and the Ministry of Unification afterward, Moon said at a meeting with campaign officials yesterday morning. “I had checked it, and it was kept as an official state record to help the next administrations with their inter-Korean policy making. The transcript should have been stored at the National Intelligence Service or the Unification Ministry. If anyone had seen a transcript, it must have been this.”

Moon also claimed that Roh and Kim had no secret one-on-one meeting, unlike Chung’s claims. “No transcript for such a meeting, therefore, can exist,” Moon said.

Moon also said he is extremely disappointed with the Saenuri Party’s political offensives, claiming that the truth will only be revealed once the presidential election is over.

Representative Woo Sang-ho, public relations chief for the Moon campaign, said they are going to wage war against the Park campaign and the Saenuri Party.

“Moon said he has seen the transcript himself,” Woo said, stressing that it didn’t contain any of Chung’s arguments. “That means the game is over.”

The conservative ruling party and Park’s campaign also have every intention of using the scandal to attack DUP rival Moon.

Chung reacted calmly to the DUP’s decision to press charges against him. He told the Web site Daily NK yesterday that “they are thinking about pressing charges against me for leaking confidential information obtained in the line of duty. That means they are admitting that the dialogue was documented.”