Gov’t offices scramble to up security after arson

Gov’t offices scramble to up security after arson 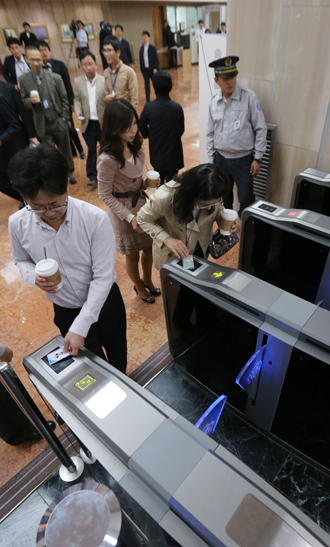 Government officials present their ID cards to get through the employee entrance of the Central Government Complex in Seoul as identification checks were beefed up yesterday. [YONHAP]

After an elderly man broke into an 18th-floor office of the Central Government Complex in Gwanghwamun, central Seoul, on Sunday with a fake ID, set a fire and then jumped to his death, security at government facilities is being criticized as too lax.

Government offices are scrambling to tighten up security.

The government complex also strengthened security on its own employees. Every bag and briefcase was X-rayed, and every official using the back entrance was forced to pass through electronic gates to access the building with an ID card.

At the front entrance, where the electronic gates are not installed, security guards checked each passerby’s ID card. Around 9 a.m., people stood in a long line to get into the building.

The Central Government Complex houses many government offices, including the Prime Minister’s Office, the Ministry of Education, Science and Technology, and the National Emergency Management Agency. About 3,800 people, including government officials, civil servants and reporters, work there. On average, more than 1,000 visitors enter the complex every day.

The Jongno Police Precinct, which is investigating the case, said that the elderly man, surnamed Kim, was judged to be suffering from depression and megalomania. Kim worked at a bank for 20 years but became depressed after he retired in 1999 and began thinking of himself as a government official.

The police added that Kim and his wife separated due to family violence since he lost hundreds of millions of won in stock investments. The police said Kim’s family testified that Kim mentioned suicide often.

The police also said yesterday that they found Kim criticizing policies that the Education Ministry implemented in the past on his blog. Kim posted a message criticizing the ministry’s decision to remove references to archaeopteryx, a prehistoric bird from the Jurassic Period and an example of evolution, from high school textbooks on July 14.

“The Education Ministry is trying to remove content that is related with the evolution theory after being pressured by religious groups,” the message reads.

In December last year, the Education Ministry received a petition from the Society for Textbook Revise, a small special interest group which requested the deletion of the archaeopteryx as an example that proved evolution, claiming that the example lacked substantial proof and thus should not be taught to students as fact.

The reporters didn’t show media ID and followed a group of government officials who were going into the building during lunch hour. Security guards didn’t stop them or check their ID.

After entering the buildings, it was very easy to move around everywhere, including high-ranking officials’ offices. At the Bank of Korea, a reporter was blocked for not having his ID, but security let the reporter in when he said the ID was at his desk.