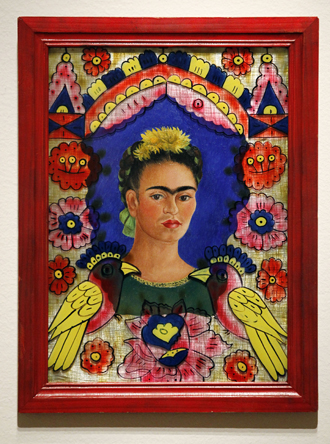 A painting by Frida Kahlo (“The Frame,” 1938) is seen as part of one of two new exhibits featuring art exclusively by women at the Seattle Art Museum, in Seattle. [AP]

SEATTLE - Inspired by the Pompidou Center in Paris, which for nearly two years removed all the men’s art from their modern galleries, the Seattle Art Museum is letting women take over its downtown building this fall.

Lovers of art by men can still get their fill in the museum’s Renaissance, Asian and Native art galleries, but those who want to explore art from this past century will be studying the contribution of women to photography, video, painting and sculpture.

The show is a subset of the Pompidou’s survey of about a thousand pieces, with more than 130 works of art made by 75 artists from 1907 to 2007. The original exhibit wasn’t designed to travel and Seattle is the first museum other than the Pompidou to show it.

Although the Pompidou exhibit was groundbreaking because of its breadth, the subject matter is not unique in the United States, where some recent shows have examined a subset of the art history spanned by this exhibit, including “WACK! Art and the Feminist Revolution,” a show from the Museum of Contemporary Art in Los Angeles that traveled to New York, Washington and Vancouver.

In addition to the Pompidou exhibit, the Seattle Art Museum is featuring another floor of art by women, mostly from its own collection, spanning the 1920s through today.

The museum’s collection is supplemented by loans from local collectors and private institutions throughout the region, including two loaned Georgia O’Keeffe paintings. The museum’s two other locations also have been infused with art by women this fall.

Come to the downtown Seattle museum prepared to be schooled about modern art and possibly a little surprised. The galleries of “Elles: Pompidou” - more thematically arranged than chronological - are provoking, to say the least.

Wander deeper into the exhibit and the merely challenging leads to provocative, with pieces asking the viewer to reconsider their ideas about beauty, women and the human body.

Viewers are clearly warned when before they enter galleries featuring the more controversial pieces, but the curators made a conscious decision not to isolate these pieces or cut them from the exhibit entirely.