Candidates get specific on economic policies

Candidates get specific on economic policies 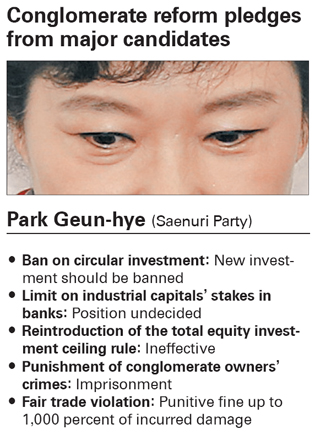 Reducing the wealth gap, creating jobs and reforming conglomerates are the recurring themes in the presidential campaigns of the country’s conservative and liberal presidential contenders.

As the clock is ticking for the Dec. 19 election, three major candidates largely promoted “economic democratization” as their key pledges, and recently produced some specifics about how they would realize the ambiguous vision. The slogan “economic democratization” is embedded in the Constitution. Kim Chong-in, a former four-time lawmaker who served as the senior economic affairs aide in the Roh Tae-woo Blue House, drafted the clause in the Constitution to include it during the 1987 amendment.

“The state may regulate and coordinate economic affairs in order to maintain the balanced growth and stability of the national economy, to ensure proper distribution of income, to prevent the domination of the market and the abuse of economic power, and to democratize the economy through harmony among the economic agents,” Clause 2, Article 119 of the Constitution states.

While the slogan has become an essential part of the campaigns of the Saenuri Party’s Park Geun-hye, Democratic United Party’s Moon Jae-in and independent Ahn Cheol-soo, experts say they lack concrete, specific pledges on how to make the political catchphrase a reality.

Concerns have also grown in the business community about conglomerate bashing as all three candidates talked about reforming the large business groups, but the strategists for the three campaigns said their candidates have no intention to go after the tycoons.

Park, the eldest daughter of the late President Park Chung Hee and the conservatives’ longtime presidential front-runner, made “economic democratization” one of her key pledges when she began her primary campaign in July to become Korea’s first female president. Her DUP rival Moon and the liberal darling Ahn also quickly followed her lead and embraced the catchphrase as a part of their campaigns.

Kim, the man who drafted the constitutional clause, is leading Park’s economic democratization campaign. A long-time adviser to Park - he also served as an economic official during her father’s presidential term - in the 1990s Kim introduced the “public concept of land ownership” through which conglomerates’ ownership of real estate properties was limited. And in Park’s campaign, he once again pursued conglomerate reform. 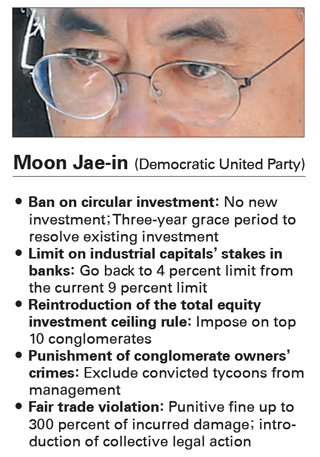 The economic democratization campaign for Moon is led by Lee Joung-woo, an economics professor at Kyungpook University and former policy director of the Roh Moo-hyun Blue House.

Jang Ha-sung, professor of finance at Korea University and former head of the economic democratization committee of the civic group People's Solidarity for Participatory Democracy, is a head economic strategist for Ahn’s campaign.

While the three candidates presented similar promises on shared growth, tax reform and employment, they have slightly different approaches on the core of economic democratization: conglomerate reform.

Limiting large business groups from entering the markets of small entrepreneurs, reinforcing punitive action against unfair trading, barring conglomerates from favoring their affiliates and removing discrimination against irregular workers were the issues they had in common.

Conglomerate owners have used circular investment to strengthen their control over the affiliates in their business groups. The practices were criticized strongly by civic groups, and the ownership structural overhaul of the conglomerates became a hot topic for politicians in the sensitive months leading to the election.

While the Park campaign said the conglomerates should be banned from making new circular investments while keeping the existing ones, Moon and Ahn were more resolute about the issue.

On the issue of reviving the total equity investment ceiling rule, the Park campaign has said it was undesirable because the regulation has already proven to be ineffective. Moon said it should be reintroduced and imposed to the top 10 conglomerates, while
questioned the effectiveness of the system.

On the regulation that bans industrial capital from owning banks, Park said the time has come to seriously think about reinforcing it, but remains undecided.

Moon and Ahn presented similar views on the matter. They both want the regulation to be strengthened back to reverse the 2009 revision. While industrial capital is currently limited to own no more than a 9 percent stake in banks, Moon and Ahn said it should be lowered to the 4 percent limit like it was during the Roh administration. 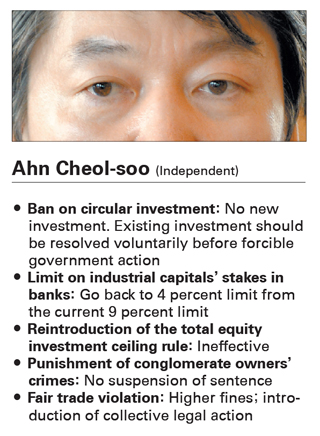 The three candidates also have similar, but slightly different views on imposing higher tax rates on high-income earners. Park said increasing the total tax revenue is more urgent than simply increasing tax rates on certain income brackets, while Moon said tax benefits to the rich should be done away with.

Ahn wrote in his book that increasing the tax rate is unavoidable to provide wider welfare benefits.

Over the weekend, the campaigns of the three candidates also saw more developments in their economic democratization pledges. The strategists of Park and Moon, representing the two largest parties in the National Assembly, agreed that they would sit down to discuss efforts to make their pledges into laws.

Moon proposed Sunday that the ruling Saenuri and opposition Democratic United parties meet and Park’s aide Kim responded positively. Ahn, an independent candidate with no control in the National Assembly except for a single lawmaker who defected from the DUP, was excluded from the process.

Instead, Ahn announced his conglomerate reform roadmap on Sunday. He promised to create a presidential committee on conglomerate reform to induce the large business groups to change and employ strong measures if they fail to do so. Ahn said he will issue forcible orders to the conglomerates to spin off their affiliates.

The three candidates also agreed that no leniency should be given to crimes of conglomerate owners. Park said they must face prison terms if necessary and Ahn also said their sentences should not be suspended to keep them imprisoned. Moon said convicted tycoons should be barred from management.

On the issue of the fair trade violations of the conglomerates, Park said they should be ordered to pay punitive fines up to 10 times the damage incurred. Moon said the fine should be up to 300 percent, and a collective lawsuit should be allowed. Ahn also supported higher punitive fines and collective actions.

The business community began putting their guards up against the politicians’ growing offensive. The Federation of Korean Industries-affiliated Korea Economic Research Institute said it will hold more discussion sessions this month to better understand economic democratization and point out the problems associated with the presidential candidates’ moves.

“What can they gain by shaking up the ownership structures of the conglomerates?” asked Lee Cheol-haeng, head of the corporate policy team of the nation’s largest business lobby. “The politicians can give the people a brief moment of catharsis, but it won’t help the economy. When the owners’ right of management is shaken, it is hard to create more jobs.”

“Economic democratization now means more than 30 different policies,” said Min Myoung-kuk, a professor of economics at Kangwon National University. “They range from a ban on circular investment of conglomerates to tax reform to an assistance package for small business owners.”

“Because the term is so broad, it has lost its function as a communicable language. The public now sees it as a magic wand that will solve all the problems of our society and economy, while the large business groups are increasingly insecure about their fates,” he said. “Instead of using the slogan of economic democratization, the candidates must present concrete, specific pledges to the voters.”

Some also worry that the term “economic democratization” is a euphemism for conglomerate bashing with political motives. “Economy and democratization are clear concepts,” said Hyun Jin-kwon, head of the Center for Social Cohesion at the Korea Economic Research Institute. “But when they are joined together to create a new term, its meaning is unclear. It’s nothing more than just political jargon for the presidential election.”