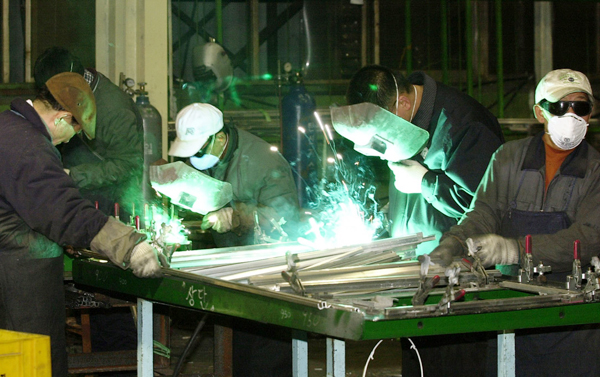 To create jobs and reduce the widening gulf between conglomerates and SMEs, the Lee Myung-bak administration launched a project in August aimed at nurturing 3,000 SMEs into larger corporate bodies by 2015 in a bid to boost the country’s exports amid the deepening euro zone crisis.

The so-called “high potential enterprises 3000-plus project” was created by the Ministry of Knowledge Economy this year. The term designates companies that are larger than regular SMEs but smaller than conglomerates.

The decision to try and upgrade them to ape or become captains of industry comes after President Lee met with many of their CEOs in February.

At the time, he said they were crucial to help Korea achieve its goal of more than $2 trillion in trade volume.

This is the latest step in the government’s push for shared growth, which places a top priority on reducing economic polarization as conglomerates have taken flak for trying to encroach into business areas traditionally held by SMEs. They have also been criticized for slashing their prices for subcontractors and poaching smaller rivals’ hard-won manpower and technology.

Market observers say Korea’s small businesses already play a decisive role in aiding the chaebol, many of which are family-owned.

According to a 2011 report on Korean SMEs by the Korea Federation of Small and Medium Business (Kbiz), they exported $15.4 billion worth of goods in 2010, contributing one-third to the nation’s total outbound shipments that year. Conglomerates made up the remaining $31.2 billion. However, SMEs employed 86.8 percent of the work force with 12.2 million employees.

Market observers say SMEs need to keep growing to keep the economy flourishing, and the government’s latest measure has been hailed by the business community.

“SMEs hesitate to grow after they reach a certain level because if they are classified as high potential enterprises they have to surrender around 160 benefits,” said Park Chae-wung, a spokesman for the Korea Chamber of Commerce & Industry. “This has created a dilemma for them because growth comes to be seen as a burden. But the government’s expanded tax breaks for the R&D activities of high potential enterprises - not to mention friendlier inheritance tax rules - will help allay fears and encourage companies to keep investing to create jobs.” 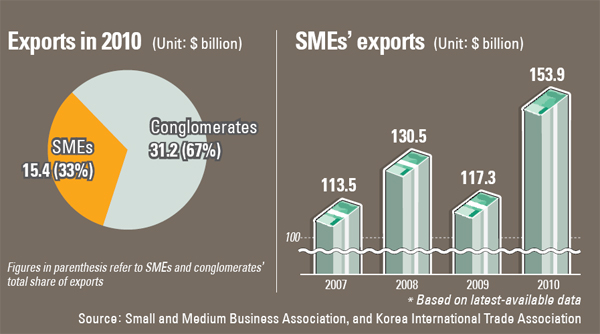 Kbiz Chairman Kim Ki-mun said the government needs to establish a presidential committee for economic democratization to better reflect the needs of SMEs, which still feel disadvantaged when trading with larger firms. There is a sense of imbalance in the market that needs to be addressed, he said, as well as unfair regulations set by the government.

“Oftentimes the thoughts of SMEs were relayed to the Small and Medium Business Administration, but they rarely got any higher up than that,” Kim said in a press conference on Oct. 8. “The government also needs to establish a ministry that both handles the affairs of SMEs and gives them more of a voice in policy matters.”

Winfried Weber, a professor of management at Mannheim University of Applied Sciences in Germany, agreed that Korea will achieve sustainable growth only when SMEs and high potential enterprises prosper.

“Germany has a smaller population and fewer big firms compared to major competitors, including the United States,” Weber said in a lecture to the CEOs of Korean SMEs in Seoul in September. “But it was able to achieve solid economic growth and recover from the 2008 global economic turmoil faster than other countries because of its bounty of hidden champions [SMEs] that have strong market dominance globally.”


In order for SMEs to bolster their presence both at home and abroad, Samsung Economic Research Institute said they first need to find niche markets where their competence can be fully leveraged.

“Since SMEs are less experienced in operating globally and have fewer resources than large enterprises, they are handicapped in terms of developing localized products,” said Jung Moo-sup, a research fellow at the institute. “This is why they must identify and exploit niche markets where their products, technologies and operation methods can be optimized.”