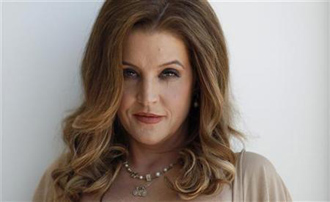 NEW YORK - When Lisa Marie Presley said she was done fighting her legacy as the only child of rock ’n’ roll king Elvis, she apparently meant it. Presley’s new video, “I Love You Because,” is an emotional duet with her late father. Due to premiere Thursday on country music TV channel CMT and CMT.com, the video was recorded in August for the 35th anniversary of Elvis Presley’s death.

It was intended to be viewed only by the 25,000 fans at an anniversary concert Aug. 16 in Memphis, but the response from fans convinced her to let it be seen by a wider audience, CMT said in a press statement on Monday.

Lisa Marie’s latest album, “Storm and Grace,” released in May, saw her embracing her Americana roots, while her lyrics address her efforts to find her place in the world as the King’s only daughter.

Presley, who died at the age of 42, recorded “I Love You Because” in July 1954 at Sun Studio in Memphis, the same time he recorded “That’s All Right.”

Producer Sam Phillips deemed it unsuitable for Presley’s first single, and it ended up on Presley’s first album, from 1956, never to be performed by Presley again, according to CMT.

Lisa Marie Presley, 44, recorded her vocals to the song in August at the suggestion of producer T-Bone Burnett as a special song for fans. The video features family photos of Presley’s 4-year-old twin girls, Finley and Harper, as well as her son, Benjamin, and daughter, Riley, along with Lisa Marie and Elvis.

“We were really moved when we saw this video,” said CMT’s senior vice president of music strategy, Leslie Fram. “Lisa Marie and her team were thrilled and so gracious to allow this to be shared.” Fram added.

The single will be available for purchase digitally on Tuesday and the full video on iTunes on Oct. 25.