Chaebol still have huge role to play in driving economy

Chaebol still have huge role to play in driving economy

Recent talk of “economic democratization” has brought Korean conglomerates into the center of a controversy over whether large business groups should be reformed, despite their role as locomotives driving the economy.

But the question remains: What should the chaebol do to lead the Korean economy back to healthy growth?

Currently, the Fair Trade Commission defines an enterprise with aggregate assets of over 5 trillion won ($4.52 billion) as a conglomerate. In Korea, most are controlled by a single owner or family.

Their development correlates with that of the nation as a whole. They began sprouting up in the 1960s when President Park Chung Hee started promoting exports as the cornerstone of his economic development plan, which included fostering large companies in each sector to accelerate the process of industrialization.

Experts say that as the conglomerates have diversified, more of their subsidiaries have achieved economies of scale, lowering per-unit costs through increased production and ramping up job creation to propel the economy forward.

The rise of the conglomerates has been so staggering that they now account for a massive chunk of GDP and it is unrealistic to think of future growth without them at the tip of the spear.

With great power comes great responsibility, however, and the role of the conglomerates has also changed. Many business leaders now argue they must shoulder the burden of the helping the country develop as a whole.

According to a survey in January of 3,000 senior business executives in 22 countries on innovative strategies and decision-making by the GE Global Innovation Barometer, nearly 35 percent said they believe big businesses will lead innovation in Korea for the next decade.

Yet as the global business environment changes, they will require new strategies to lead the nation forward, economists say.

“We have now entered the phase of global competition,” said Hwang In-hak, director of corporate policy research at the Korea Economic Research Institute. “We need a new set of entrepreneurs from what sufficed in the past.”

In previous years and decades, Korea emphasized the indigenization of foreign technology through reverse engineering. As a result, local firms were able to assimilate imported technology fast enough to expand rapidly, thus enhancing their industrial structures.

Hwang said the conglomerates have already moved beyond that era and are now seeking ways of becoming global leaders based on new technological developments.

The business world is engaged in a covert war to obtain patents and develop the latest technology, and Korea is no exception, he said. As such, it will be crucial for the conglomerates to invest more in research and development to advance their own technology and generate future growth engines, he added, using the ongoing patent war between Samsung Electronics and Apple as a case in point.

Samsung Electronics is already ahead of the curve as it pours money into R&D each year. Last year, the tech giant spent 10.3 trillion won in this area, equivalent to 6.2 percent of its annual sales. In 2010, its R&D investment stood at 9.4 trillion won. 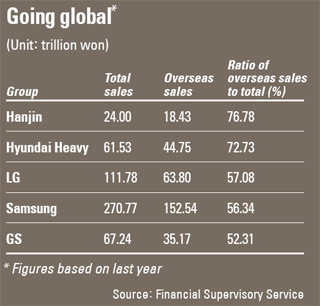 According to a survey conducted by Forbes Korea in May, the nation’s top 10 companies, including Samsung Electronics and Hyundai Motor, said that developing foreign markets had given them their biggest competitive advantage recently.

Many Korean conglomerates are going global these days, with more than half of their revenues on average coming from overseas.

Samsung Electronics exports last year were worth 16.5 percent of the nation’s total, or 101.7 trillion won of 615.2 trillion won.

“If you look in detail, most of their revenue now comes from overseas,” said Choi Seung-no, secretary general at Korea’s Center for Free Enterprise.

Choi believes more medium-sized enterprises should be encouraged to grow into large conglomerates in the future.