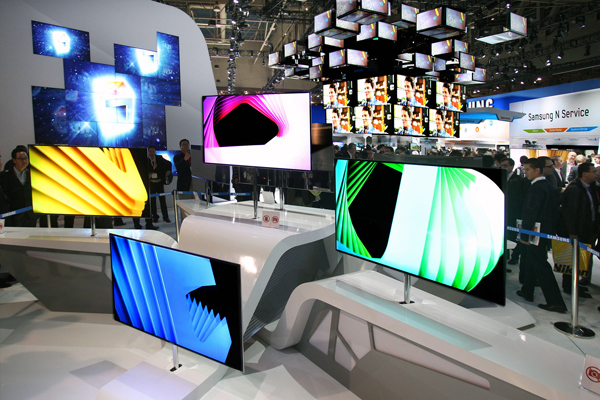 British mountaineer Kenton Cool was able to send out a tweet on his smartphone last May while straddling the top of Everest at freezing climes of 30 degrees below (22 Fahrenheit below) zero.

“Everest summit No. 9! First tweet from the top of the world thanks to a weak 3G signal and the awesome Samsung Galaxy S2 handset,” Cool tweeted.

Even under such challenging conditions, the Galaxy S2 was operating normally as it was equipped with an Organic Light-Emitting Diode (OLED) display as standard.

OLED panels can endure even under such low temperatures, whereas liquid crystal display (LCD) screens stop functioning at 10 degrees below zero after a short period of time.

OLED technology also claims the most true-to-life color palette, and is said to give a response time 1,000 times faster than LCD, which refers to the time images become visible once a signal is detected. They also facilitate displays as thin as paper, meaning they can be bent or twisted.

As OLED is seen as the future of displays for mobile gadgets, Samsung Electronics and LG Electronics, the world’s top two TV makers, respectively, are rolling up their sleeves to dominate the global for OLED TVs.

Samsung Group Chairman Lee Kun-hee has often stressed the need to capture the lead in this market segment. “The electronics industry is engaged in fierce competition to dominate the display industry,” Lee said. “Samsung must become the world’s No. 1.” 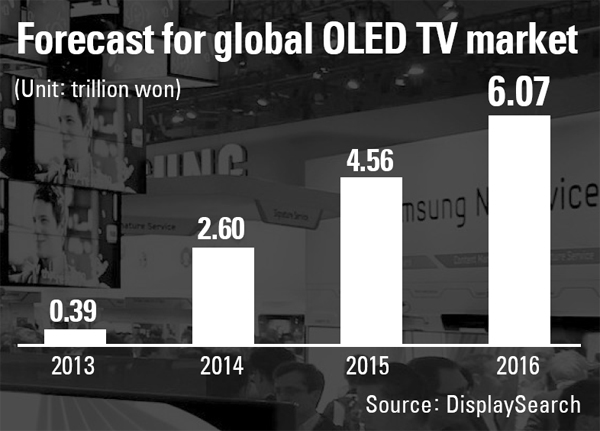 During a meeting with 300 top LG executives last month, Koo Bon-moo, the group’s chairman, ordered them to concentrate their abilities on the OLED and display sector. “You will be evaluated based on your performance,” he reportedly warned them.

Both Samsung and LG unveiled ambitious OLED TVs at the Consumer Electronics Show in Las Vegas earlier this year. However, neither has yet rolled out mass production.

However, Samsung has already started massively producing OLED displays and has been applying them to its latest smartphones since last year, including its hugely popular Galaxy S2.

It has almost monopolized the 7-inch, or smaller-size OLED panel market, seizing control of 99 percent of the $3 billion global market last year. The entire OLED market is forecast to more than triple to $10 billion this year, according to DisplaySearch, a leading global market research and consulting firm that specializes in the supply chain for displays.

Samsung Electronics said earlier that it is pushing to mass-produce OLED TVs with 55-inch screens this year as it sets out to prove it has the most cutting-edge technology in TV manufacturing. Rival LG is trying to recover its losses in the market for smaller displays.

However, experts do not expect OLED TVs to become commercially available until 2014 as the companies have not figured out how to manufacture them in a way to spin profits.

They have even taken their battle for dominance to the courts, and Samsung is now suing LG for allegedly stealing its technology by hiring its former employees.

In return, LG accuses Samsung of infringing its OLED patents on its smartphones.

Industry experts say the key factor determining who will dominate the OLED TV market will boil down to production. This market segment is tipped to hit $6 billion by 2016, DisplaySearch says.

Experts say that for a company to profit by mass producing semiconductors or displays, the production yield rate has to be at least 50 percent. If that yield exceeds 90 percent - meaning that 90 percent of the displays produced are usable - the company will rake in massive profits.

The reason Samsung and LG, or even SK Hynix, are able to weather the storm in the worsening semiconductor market while their rivals in the United States, Japan and Taiwan suffer is because their production yields are over 90 percent. This helps them sell their products at cheaper prices.