Tesco to stock Korean items at 12 stores in U.K.

Tesco to stock Korean items at 12 stores in U.K. 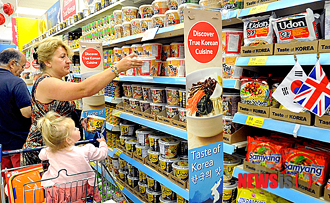 Korean food is set to expand its presence at British supermarkets.

Homeplus, the nation’s second-largest discount chain, and Korea Trade-Investment Promotion Agency (Kotra) said that 49 food products introduced in its recent Taste of Korea promotion will appear on the shelves of Tesco stores in Britain.

It is the first time for domestic food companies to regularly sell their products at retail stores in the United Kingdom. Previously, they were mainly restricted to selling at overseas-based Korean supermarkets.

Taste of Korea is a promotional event for Korean food co-organized by Homeplus, the local discount chain owned by U.K. retailer Tesco, and Kotra to encourage the shared growth of small and medium enterprises as well as large conglomerates.

The original promotion that introduced 142 products by 25 manufacturers was held in London from July 30 until today.

Under the initial plan, the products were to be sold at just one Tesco store in London’s New Malden, which plays home to a large Korean community, but the retailer decided to expand the number of stores after receiving enthusiastic response from local consumers, it said.