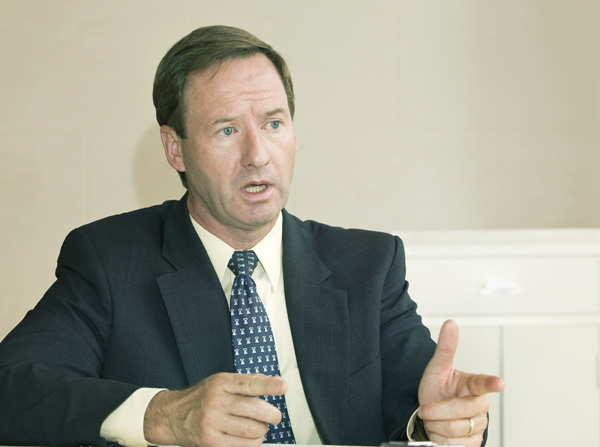 
Former CIA intelligence officer Bruce Klingner is skeptical of recent speculation about North Korea’s potential political and economic reform. So far, he thinks the leadership of Kim Jong-un is little different from that of his father’s.

Klingner, a senior research fellow for Northeast Asia at the Heritage Foundation, a U.S. think tank based in Washington DC, sat down with the Korea JoongAng Daily last week during his visit to Seoul to attend a forum held by the Sejong Institute.

The 52-year-old former U.S. intelligence agent started working on Northeast Asian issues in 1993, when he was chosen to serve as chief of a CIA branch dealing with Korean issues. Part of his job was to provide analytic reports on military developments on the Korean Peninsula after North Korea announced its withdrawal from the Treaty on the Non-Proliferation of Nuclear Weapons (NPT).

He was promoted to deputy chief for Korea in the CIA’s Directorate of Intelligence in 1996, in charge of offering in-depth analysis on current affairs in the two Koreas for the U.S. government. “At that point, we, the CIA, were writing briefs and other papers for the president of the United States, secretary of state and secretary of defense, and I got to attend a lot of White House meetings on North Korean policy, at the tail end of the Clinton administration,” he said. “And then after 20 years in the CIA, I left, but I have been working on Northeast Asian issues ever since.”

Q. It’s been about 10 months since Kim Jong-un was inaugurated as North Korea’s new leader. How do you evaluate his leadership?

One of our major questions about North Korea at this point is whether the regime will open up its economy to the outside world and pursue economic reforms. Is this likely?

On economic reform, I tend to be pretty skeptical. I’ve been hearing for 19 years predictions about an imminent widespread reform. I remember that in 1993, the state department’s intelligence organization predicted that Kim Jong-il was a ‘bold economic reformer’ and that North Korea was on the brink of implementing widespread economic reform. We are still waiting, though.

They implemented the 2002 economic reform, but they walked back from it. They allowed the flourishing black market, initiated by their people, and periodically cracked down on it. So what it tends to be is sort of episodic indications of reform, but they are always very nervous that it will lead to loss of control. But if they do, I think it would be very small, it will be controlled, and is unlikely to succeed because they won’t change the entire social system.

Some experts see Kim’s educational background in Switzerland and appreciation of some elements of Western culture as cues for reform. Do you agree?

When he was educated in Switzerland, he was a teenager. And also, other third-world dictators were trained or educated in the West. Of course, Kim Jong-il liked Hollywood movies, but we all know what kind of leader he was. I think he will be different in the sense of being much more personable, outgoing, being more suited to public diplomacy. He clearly is comfortable giving speeches, more so than his father.

I think we will see some differences, but it will be more in terms of political image, rather than a certain political reform. When it comes to his foreign and security policy, there’s no evidence that Kim Jong-un is any different from his father. North Korea’s New Year’s editorial, as well as all public statements issued since late December, say it will maintain its juche [self-reliance] and songun [military-first] polices, and that there will be no changes.

Is a third nuclear test likely?

Certainly. Asking if North Korea will make another provocation is like asking if it will rain. Of course it will. It’s in their nature. We just don’t know when. I used to work on satellite imagery when I was in the CIA, and I know predicting a nuclear test is very difficult. There’s fewer observable data indicating a missile or rocket test, particularly from a fixed launch site.

If it is not a known nuclear-test location, it’s actually very easy to hide. And also, North Korea knows that we observe them, they can raise tensions and hope to gain objectives, just by showing some activity at a known launch site. We haven’t heard any news recently from South Korean intelligence officials saying there have been any preparations. It may not happen at the end of the year, as many of us thought it would, but maybe it will take place in early 2013.

Will the U.S. change tack if a new president is inaugurated?

Whoever the next U.S. president is, the future U.S. policy on North Korean affairs won’t change that much. The biggest potential change will come from South Korea, especially if one of the two liberal frontrunners, the Democratic United Party’s Moon Jae-in or Independent Ahn Cheol-soo pushes for a more unconditional approach [to offer aid to the North], that will be at odds with the U.S. administration.

Will ties between Beijing and Pyongyang change if Xi Jinping takes power?

China doesn’t have any influence on North Korea, even though many people think it has. And it is very unwilling to use what little influence it has. They are afraid of bringing about implosion or explosion.