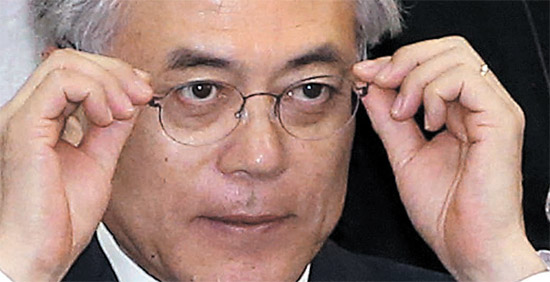 Facing a ruling party’s attack about a former liberal president’s controversial remarks during the 2007 summit with North Korea, the main opposition’s presidential candidate demanded they produce the alleged transcript if it indeed exists.

On Friday, ruling Saenuri Party’s lawmaker Chung Moon-hun claimed that he “saw the transcript in which the late president Roh Moo-hyun said [to then-North Korean leader Kim Jong-il] that he was playing a role as a spokesman for the North Korean regime and promised to evacuate the U.S. forces from the country.”

Saenuri reps say there’s indeed a transcript of a closed-door, secret meeting between Roh and Kim, and demanded a legislative probe into the case. The opposition Democratic United Party responded by saying that Chung’s allegations are false, that there was no secret meeting, no transcript and no secret deal.

“We will entirely agree with opening up the transcript if the ruling party promises two things,” DUP Representative Jin Sung-joon, spokesman of Moon’s campaign, said at a press briefing.

“Rep. Chung should immediately open up the ‘fake transcript’ and say how he obtained it, and the ruling party’s presidential candidate Park Geun-hye should say something about how she would take responsibility if it turns out to be false.”

Chung, who worked as the Lee Myung-bak Blue House’s unification affairs secretary from 2009 to 2010, told the National Assembly that a transcript of a secret dialogue between Roh and Kim during the summit exists.

Chung also made another revelation Friday that Roh promised to Kim that Seoul would move all U.S. troops out of the capital region.

Chung said in a radio interview with MBN yesterday that he “is 100 percent sure” that all of his claims are true, but he “can’t say how he knew about the content of the alleged dialogue.”

Chung said he “still can’t understand why the DUP is resisting a legislative inspection into the case.” He said he just “wanted to confirm publicly whether Roh’s remarks are included in the transcript.”

Lee Sang-il, a spokesman for Saenuri, also said that “If Moon is really confident, the easiest way [to resolve the problem] will be to persuade the DUP’s leadership to agree on producing the transcript with the ruling party.”

Under the law regarding the management of records concerning the president, the records can be produced only if two-thirds of incumbent lawmakers agree to do it.

Park Jie-won, the floor leader of the DUP, still said yesterday at a party meeting that there was no such transcript and if the ruling party indeed has one, they have to produce it. He said it would be “a waste of state budget” to launch a parliamentary inspection on “such a ridiculous lie.”