Vets on wheels show hardiness of the disabled

Vets on wheels show hardiness of the disabled 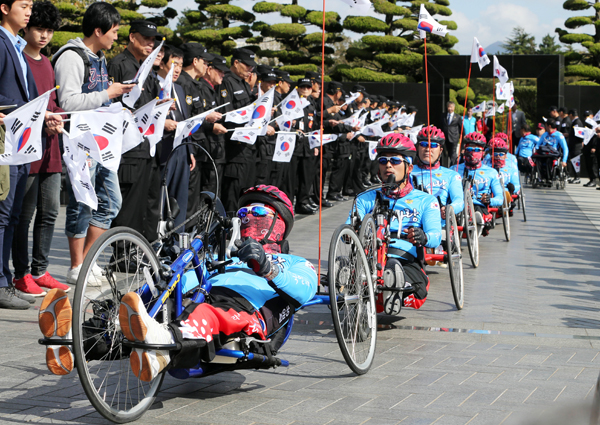 A group of 22 veterans begin their seven-day cross-country journey yesterday from Busan’s UN Memorial Cemetery, which will end at the National Cemetery in Seoul on Oct. 21, covering 900 kilometers (559 miles). The 22 men, all recognized as veterans of national merit for their sacrifices, will travel by handcycles, which are powered by arms. [YONHAP]


BUSAN - A group of 22 veterans consigned to wheelchairs after being injured during military service started a seven-day cross-country journey yesterday. They will travel from Busan to Seoul, 900 kilometers (559 miles), in handcycles, which are powered by the arms.

The 22 are recognized as men of national merit for their sacrifice. Some are paralyzed while others have lost legs.

“To mark the 60th anniversary of the end of the [1950-53] Korean War next year as well as to give hope to other injured veterans that they can accomplish their goals, we planned this trip,” said Han Tae-ho, a member of the 22-member group.

They include veterans of conflicts such as the Vietnam War and men injured at home during military service.

The men started their journey yesterday at Busan’s UN Memorial Cemetery, where the remains of 2,300 UN soldiers are laid to rest.

Their adventure will take them to war commemoration spots like the Memorial Hall for the Incheon Landing Operation and finally finish at Seoul National Cemetery, where remains of Koreans who sacrificed their lives for the country are laid to rest.

The 22 men shared tales of prejudice and discrimination they have faced because of their disabilities.

“I was wounded because I was fighting for my country,” said Lee Suk-dong, who lost his two legs in Vietnam in 1967. “I could not step outside my house as if I had sinned.”

They said it was other injured veterans, both older and younger than themselves, who helped them come out of their isolation. Song Shin-nam, whose legs were badly injured in Vietnam in 1966, learned to play table tennis from other veterans.

“I practiced playing table tennis for hours every day,” said Song. His efforts won him a gold medal at the 1972 Paralympics in Munich, the first Korean gold from the Paralympics.

To prepare for the expedition, the members have practiced since August riding handcycles up to 100 kilometers a day.

“I hope this event will remind people that today’s Korea is built on sacrifice and blood shed by these brave men,” said Lee Seong-kuk, head of the Busan Regional Office for Patriots and Veterans Affairs.