Japanese see new models as a tonic for tepid sales

Japanese see new models as a tonic for tepid sales 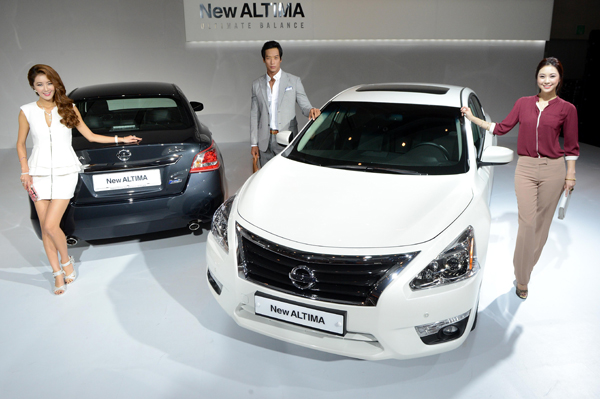 Models pose next to the latest Altima that was unveiled at the Intercontinental Hotel in southern Seoul yesterday. [NEWSIS]


Nissan and Honda are looking to boost their sales with new models in Korea.

Nissan, Japan’s second-largest automaker, suffered a huge setback this year. It only sold 1,595 units in the first nine months of this year, marking a 22.3 percent on-year decline.

Honda has sold 2,888 units through September, up 19.4 percent from the same period last year. However, such sales figures pale in comparison to when it ranked as the best-selling foreign auto brand in Korea four years ago. It now ranks 10th in the imported car market with a share of just 3.02 percent.

Hoping to shrug off anemic sales and regain their former glory, Nissan and Honda are rolling out new models to turn the tide.

At the Intercontinental Hotel in Seoul yesterday, Nissan introduced the new Altima, its popular midsize sedan, for the first time among Asian countries.

The fifth-generation Altima has been hugely successful in the United States since it came out in late June, selling 76,939 units through September.

Hoping to benefit from the Korea-U.S. free trade agreement, the vehicle will be shipped from Smyrna, Tennessee, to Korea.

“Korea is a very important market for Nissan,” said Kenji Naito, the head of Nissan Korea. “We hope to sell 300 units a month.”

The redesigned Altima will come with a choice of two gasoline models, a 2.5-liter four-cylinder and 3.5-liter six-cylinder. Naito said these will offer improved fuel efficiency - 12.8 kilometers per liter (30.1 miles per gallon) for the 2.5-liter - and competitive prices. The smaller-engine model costs 33.5 million won ($30,300), while the latter costs 37.5 million won.

Honda plans to strike back by releasing five models by the end of this year. It said on Tuesday that it will release its Odyssey, a minivan, and Pilot, an SUV, next month. It will then import its Crosstour, a versatile crossover utility vehicle, as well as its Civic hatchback and Accord in December.

Honda has also placed a strong accent on the Accord, its popular midsize sedan. The company said it hopes this will account for half of its total monthly sales target in Korea of 600 vehicles.

To cope with appreciating yen, the automaker said it will also ship its models from either the U.S. or the United Kingdom. The Accord and Crosstour will be imported from Ohio, while the Odyssey and Pilot will be brought from Alabama. Only the five-door Civic hatchback will come from its factory in Swindon, U.K.

It will also reinforce its distribution network, by increasing the number of personnel and appointing new dealers in cities like Incheon, Suwon and Ilsan, Gyeonggi, and Changwon, South Gyeongsang.

Despite these efforts, some industry insiders have expressed doubt as to whether the Japanese automakers - both of which focus on cars with petrol engines - can boost their sales as Koreans are increasingly turning to diesels. These accounted 52.8 percent of all imported car sales last month.

Naito admitted this could be a barrier. “The rising yen is a problem and Korean consumers’ taste is changing really fast in favor of diesels and fuel-efficient cars,” he said. “These were fortes of European cars, but Japanese automakers will also come up with better plans to satisfy Korean customers.

“As Korea’s imported auto market is growing, we think more people will have crave a wider range of foreign cars depending on their lifestyle, and hopefully we can satisfy that demand.”

Toyota, the No. 1 player in Japan, currently ranks fifth among imports despite also being short on diesels after selling 8,015 units in Korea so far this year, more than double what it achieved in 2011. It won by rolling out aggressive marketing campaigns and tapping entertainers like Kim Tae-hee and movie actor Jang Dong-gun to bolster its promotional efforts, experts say.

Honda said it is confident of the quality of its products and does not need major stars to fight on their behalf.

“If the vehicle itself is good enough, it will appeal to customers anyway,” Honda Korea CEO Chung Woo-young said on Tuesday.