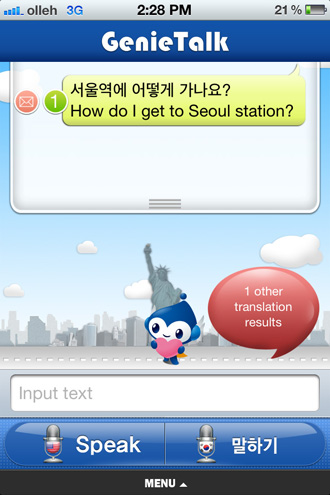 GenieTalk, a new translation app developed by the Electronics and Telecommunications Research Institute.

Korea has introduced a translation and interpretation app for mobile devices that is believed to be more accurate than Google’s.

GenieTalk, which can be downloaded for free on both Android and iOS, converts from Korean to English and vice versa. However, it will be further developed to accept six more languages including Russian, Spanish and Japanese before the Pyeongchang Winter Olympics in 2018, the Ministry of Knowledge Economy said yesterday.

The ministry commissioned the app in conjunction with the Electronics and Telecommunications Research Institute (ETRI).

“Although similar translation apps are already out in the market, the ETRI has applied voice commands to a translation system so smartphones can actually read out the translation,” said An Chang-yong, director of the ministry’s software and IT convergence division.

“We think GenieTalk is more accurate in comprehending and speaking Korean-language commands than Google’s translation service,” he said.

The ETRI said the app had an 80 percent success rate compared to 65 percent for the Google service when it ran tests by feeding both 100 sentences each on two occasions.

The app will come in handy for couples who take trips overseas but don’t speak English, as well as foreigners visiting Korea, such as K-pop fans, he added.

It cost the state-run research center 7.8 billion won ($7.05 million) to develop the app over three years. To recoup some of this, the research center plans to sell a premium version of the app in the future with an extended vocabulary. The basic version will still be free, it said.

“We could add words that are often used at hospitals so users won’t come unstuck by the language barrier,” said Hwang Seung-ku at ETRI’s big data research lab.