The streets of Incheon are colored with banners supporting the city’s ambitious move to host the United Nations Green Climate Fund. After months of planning and lobbying, Incheon will find out if the efforts have paid off; tomorrow the secretariat for the GCF will finally be decided. Currently in the running include Bonn and Geneva to host the environmental subsidiary of the UN Framework Convention on Climate Change.

The satellite city has launched the citizens’ support organization of 123 members, including the mayor, local businessmen and scholars, in an effort to promote the bid.

In addition to Incheon residents, the Korean government also is an active proponent of the move to make Songdo the home to the GCF secretariat.

Together with the central government, Incheon is busy emphasizing the environmentally friendly aspects of the city considering the nature of the body it aims to host. The resolution for Incheon to compete for GCF secretariat was passed at the National Assembly unanimously. With several environmentally friendly projects including bicycle riding campaign and Clean-up Day event held, it has been promoting itself as the model green city of low-carbon output and sustainable development.

This month Incheon city Mayor Song Young-gil participated in the second Global Green Growth Forum held in Denmark along with Prime Minister Kim Hwang-sik and appealed to the representatives of other countries to support the bid. Incheon actively promoted the environmentally friendly features of the Songdo International Business District at the GCF board meeting.

GCF is an international fund which allows for developed nations to help the developing by allocating funds and helping them adapt damage mitigating practices, by helping them reducing greenhouse gas emissions and implement policies designed to counter climate change. The GCF fund is expected to be similar to the scale of World Bank, at $800 billion. 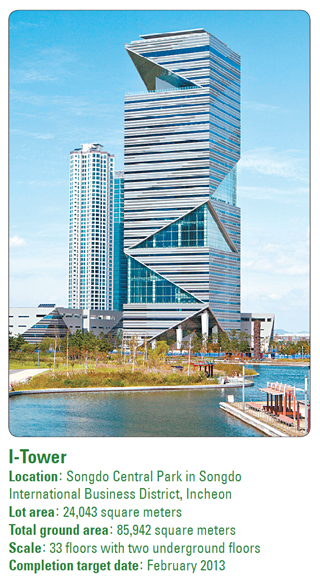 Songdo will help strengthen the nation’s status in the green growth field. If the country succeeds in hosting the GCF secretariat, which will play an important role in addressing the climate change worldwide, it will surely contribute to strengthening Korea’s brand power in the green growth industry. If the GCF develops into an organization like the World Bank in the environment field and leads the climate change funding system, Korea can become the center of climate change funding and finance industry.

We can also expect an additional boost when collaborating with Global Green Growth Institute to support and strengthen the ability of developing countries to meet the goal of cutting emission of harmful gases.

Economic effect is expected to be substantial as well. By hosting an international organization, which is considered a high-level service industry, Korea can create a momentum in the development of service industry, which will play a core part in advancing Korea’s economy. Also through various international activities related to climate change, high-income foreign consumers’ funds are expected to flow into Korea.

Furthermore, international meetings and GCF staff expense are expected to generate an annual revenue of 381.2 billion won in production and job creation and the likes. If GCF uses various financial measures such as private and innovative resources, it is also expected to contribute to heightening the competitiveness of the financial sector.

By hosting the GCF secretariat, the status of not only Incheon but also Korea as a nation will rise. And if GCF is able to develop as an international organization overseeing the climate change funding, experts are expecting that Korea will be able to step up as the global financial center for climate change.

It is expected to raise 100 times the effect of the 2018 Pyeongchang Winter Olympics and through the numerous international meetings held over 120 times a year, the city is expecting industrial development and foreign investment. Once the number of staff working in the secretariat becomes normalized, then the staff is expected to grow to 8,000 from the initial 300 to 500. According to the Incheon Development Institute, the local economic effect is expected at around 190 billion won.

Songdo has been promoting itself as a global business city and this will certainly be a good chance for the city to become an international city. The city is expecting that hosting GCF will also be a great help in attracting foreign companies and investment. By securing the lead in global climate change paradigm, the city is expecting to allocate more resource toward attracting investment in fields of solar energy and secondary cell.

Last November, Korea has officially delivered its intention to host the GCF secretariat in one of its cities, and this March the country has decided on Songdo in the running to host the secretariat for the international body. Through the first GCF board meeting and UN FCCC meeting, it has been preparing for the second GCF board meeting scheduled to take place starting today until Saturday at Songdo Convensia, a large-scale convention hall.

At the board meeting, the city to host the final secretariat of GCF will be decided and the nominated city will be approved at the 18th UN Climate Change Conference. Total of five countries, including Germany, Switzerland, Mexico, Poland and Namibia, are competing with Korea. The German and Swiss cities are considered to be the strong contenders for the nomination.

Songdo was built with that UN model in mind.

Songdo reuses some 40 percent of its sewage water, and plans to reuse 76.3 percent of its waste by 2020. Songdo also earned the U.S. LEED certificate and possesses the largest portion of green land (32 percent) in Korea.

Songdo meets the accessibility and safety fit for large-scale international organizations as it is only a 20-minute drive from Incheon International Airport, and is 40 minutes from Gangnam, southern Seoul.

Songdo houses a building for UN organizations, I-Tower, which will be completed February of next year. Upon completion some 10 international organizations will fill the space.