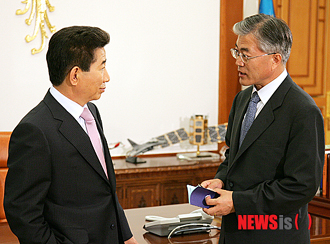 A Saenuri official yesterday said former President Roh Moo-hyun ordered his Blue House to shred a transcript of a dialogue between himself and North Korean leader Kim Jong-il at a Pyongyang summit in 2007, according to a local newspaper.

A high-ranking ruling party official told the Munhwa Ilbo, “The Blue House was ordered to shred [the transcript]” after the summit.

Last week, Saenuri lawmaker Chung Moon-hun made the bombshell allegation that Roh disavowed the Northern Limit Line, the de facto maritime border between North and South Korea, in a closed-door conversation with Kim at the summit.

The allegation has rocked the presidential race because the Democratic United Party’s candidate, Moon Jae-in, Roh’s chief of staff at the time, was the South’s chief organizer for the summit. Chung’s allegation portrays Roh and his allies as being pro-North Korea, even on such issues as the de facto maritime border. 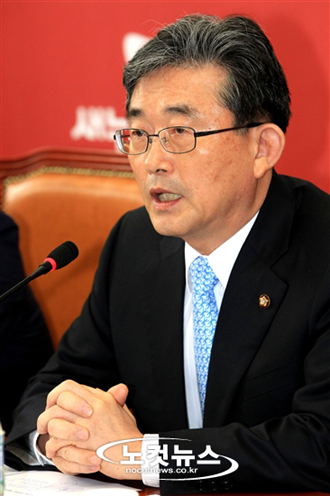 Moon and other DUP members have denied the allegations. So have members of the Roh government who accompanied him to the summit and met Kim with him on the day of the alleged closed-door meeting.

They have also insisted there is no transcript of such a meeting.

“In 2007, after the summit, the National Intelligence Service stored the original transcript, and the Blue House kept a duplicate,” the unidentified Saenuri Party official said. “But sometime between late 2007 and early 2008, Roh ordered that the [duplicate] transcript be shredded.

“So the Blue House doesn’t have it now,” the official added. “But the NIS didn’t destroy it and has kept it until now.”

Park Jeong-ha, a Blue House spokesman, told the JoongAng Ilbo that they “don’t have such a transcript in the Blue House.”

The DUP said the Munhwa Ilbo report was false and demanded the newspaper publish an apology.

“After checking facts with former Blue House officials in the Roh administration, we found that they didn’t order any documents regarding the October 2007 summit be destroyed and that all documents were transported to the national archives,” Jin Sung-joon, a spokesman for Moon’s camp, said in an Internet comment yesterday.