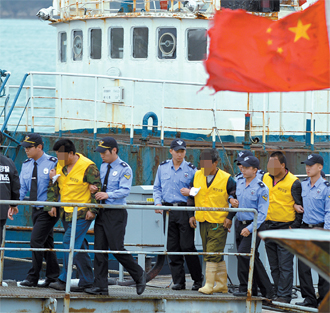 Members of the Coast Guard yesterday take Chinese fishermen caught illegally fishing in Korean waters to their West Regional Headquarters in Mokpo, South Jeolla. One of them was allegedly fatally shot by a rubber bullet fired by a coastguardsman in a confrontation Tuesday. [NEWSIS]

Diplomatic tension is expected to rise between Seoul and Beijing following a clash in Korean waters Tuesday that left one Chinese fisherman dead after he was shot in the chest with a rubber bullet by a Korean Coast Guard officer on an illegal fishing raid.

According to the Coast Guard yesterday, at around 3:10 p.m. Tuesday, around 30 Chinese fishing vessels were spotted on the Korean side of the Exclusive Economic Zone in the Yellow Sea about 90 kilometers (56 miles) northwest of Hong Island in Sinan County, South Jeolla.

After confirming the illegal crossing, the Coast Guard in nearby Mokpo dispatched a patrol ship. As the Korean boat approached the vessels, Chinese fishermen reportedly fought off the raid with lances, hacksaws and knives.

Threatened, a Coast Guard officer fired five rounds of rubber bullets. The final round hit a 44-year-old Chinese fisherman surnamed Jang on the left side of his chest.

Based on a five-minute video of the incident, the Coast Guard confirmed yesterday that Jang was swinging a saw when he was shot. The video was taken by a Coast Guard officer on the patrol ship.

Two of the Chinese vessels were seized as well as the sailors on board.

Jang received emergency treatment and was transported to a hospital in Mokpo by helicopter but was declared dead at around 6 p.m. He wasn’t breathing when he arrived at the hospital and had a bruise on the lower part of the chest, according to the hospital.

“The cause of his death is currently unknown,” said Kang Sung-hee, chief of the Coast Guard’s Mokpo headquarters, yesterday. “We will confirm the cause after carrying out an autopsy and confirm whether the death was due to the rubber bullet or not.”

Kang also told reporters that the Coast Guard doesn’t use rubber bullets unless illegal fishermen resist a raid violently. “The shootings were based on the manual as our officers’ lives were threatened,” he said. 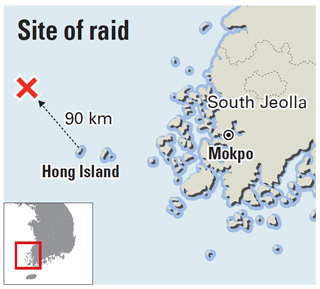 According to the Coast Guard, 23 Chinese fishermen from the two seized vessels are now being held in custody for questioning in Mokpo. Other boats reportedly went back to the Chinese side.

Hong Lei, spokesman of the Chinese foreign ministry, said in a regular briefing yesterday, “Korea should carry out a thorough investigation into the case and punish whoever is responsible. It should also take measures so that this kind of incident does not reoccur.” 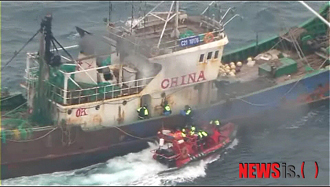 Teng Anjun, consul general of the Chinese Consulate in Gwangju, visited the Coast Guard headquarters in Mokpo yesterday morning and was briefed about the incident.

The Ministry of Foreign Affairs and Trade expressed regret and offered condolences to the fisherman’s family.

“Our stance is clear that if China complains, we cannot accept it because the Chinese boats were fishing illegally from the start,” a Seoul government official said.

Chinese fishing vessels have clashed frequently in recent years with the Coast Guard.

On Dec. 13 in waters off Incheon, a Chinese sailor stabbed and killed a Coast Guard officer on a raid. The fisherman was sentenced to 30 years in prison by the Incheon District Court in April for killing Cpl. Lee Cheong-ho with a knife. The incident sparked public anger against China in Korea. In September 2008, another Coast Guard officer was beaten to death by Chinese fishermen during a raid.

In March, four South Korean activists, including Kim Young-hwan, were arrested in China by security officials on charges of helping North Korean defectors. The four were released in July, but after arriving in Seoul, Kim said that he was beaten while detained. There has also been tension between the two countries over Ieodo, a group of submerged rocks located 149 kilometers from Korea’s Mara Island. China claims Ieodo.