Kaist’s Suh will step down as president in March

Kaist’s Suh will step down as president in March 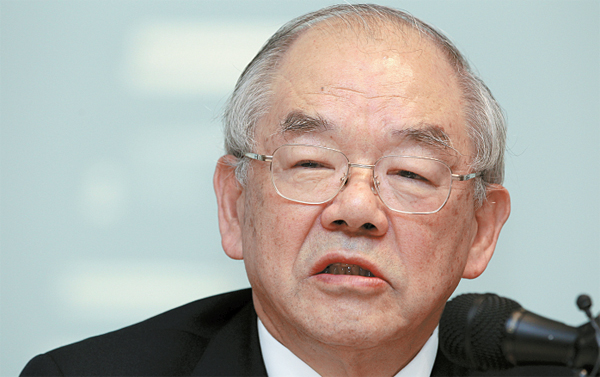 
After months of pressure to resign, Korea Advanced Institute of Science and Technology President Suh Nam-pyo, 76, said yesterday that he will voluntarily step down from his post in March.

At a press conference held at the Somerset Palace Hotel in central Seoul yesterday, Suh said a committee to nominate a new president will select his successor in January.

He said he will step down after the annual board of directors meeting in February, becoming the second Kaist president to resign in the middle of a term in the university’s 41-year history.

“The next Kaist president needs to have high academic and international awareness as you would find in the top 10 colleges in the world,” Suh said. He emphasized that his successor “should not be chosen by politicians.”

The former Massachusetts Institute of Technology professor became president in 2006 and is the first Kaist president to serve two consecutive terms, after being reappointed in July 2010. His term was set to end in July 2014.

In the remaining five months, he said he will “finish up some international projects” and also help scout a suitable successor.

Suh has been under fire for controversial and ambitious academic policies that were meant to raise the standards of Kaist. But the suicides of five students were blamed on the policies being too tough, and the school’s board of directors, led by chairman Oh Myung, urged him to step down.

Suh said that one condition of his stepping down was that Oh will go with him. “Simultaneously, Oh Myung, chairman of the board, needs to resign as well before the year’s end,” he said at the press conference.

Suh has had friction with the student body, professors and the board of the directors, but especially with the 72-year-old Oh.

In 2007, he instituted ambitious plans to raise standards at the technical school that brought greater pressure on students. All lectures were conducted in English to make the students totally international and scholarships were reduced if a student’s grades fell below certain levels.

He also made it more difficult for teachers to get tenured positions.

In July, the board of directors was scheduled to vote on a motion to terminate the remaining two years in Suh’s contract. The meeting was called off after Suh declared that he and the chairman had come to a compromise.

According to Suh’s attorney, the agreement included a request from Suh that the board continue his improvements of the school and that it cooperate to clear up a patent theft case. A faculty council accused Suh of stealing a patent of a Kaist professor, which Suh countered by suing four professors for defamation in March.

The agreement also said that Suh will be able to jointly select his successor with the board and that he was able to choose to resign, Suh’s counsel said.