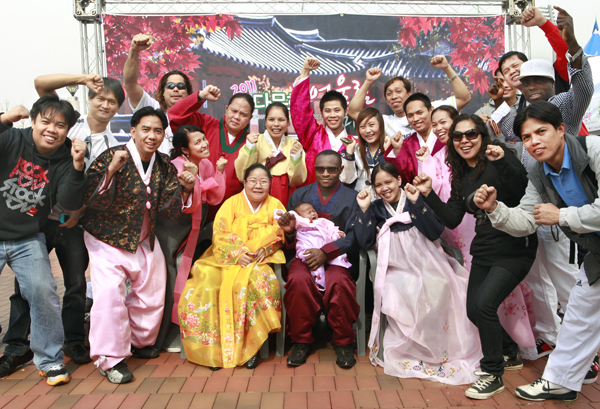 A mixed-nationality couple with a newborn baby attend an annual festival held in Ansan, Gyeonggi, that celebrates Korea’s rapidly growing foreign population and multi-ethnic families. There are over 1.4 million registered foreign nationals in the country. Ansan’s foreign national population grew from 18,000 in 2005 to over 44,000 last year. By Park Sang-moon


Two months ago, a couple from South Jeolla had their first baby, a healthy 2.78 kilogram (6.13 pound) boy. The father was Kim Gan-yong, a 38-year-old farmer from the nearby village of Saengil-myeon. The mother was his wife Petsamon, 21, who comes from Laos.

“The birth was a celebratory event for the county,” said a spokesman for the Gangjin Medical Center, which was opened less than a year ago to promote couples having more children - particularly multiethnic or mixed nationality couples. It has given discounts to mixed couples as well as waiving their room bills.

“Within 11 months of opening the ob-gyn center,” the spokesman said, “it is significant that the 100th child was born to a multiethnic family.”

It is significant indeed. Behind all the talk of new “growth engines” to ensure Korea’s prosperity in the future, no engine is more important than the people needed to work in factories, the service sector and come up with the ideas. Korea is on a trajectory to run out of them. Japan is already on that downward spiral, and China is expected to enter it too, largely because of its decades-old one-child policy.

Korea is aware that its fertility rate is one of the lowest in the world, and the aging of its population is the biggest risk to its status as an advanced economy and the comforts that come with it. Whether it can reverse the demographic slide is the big question.

Births like that of the baby in South Jeolla are a hopeful sign. South Jeolla’s Gangjin County boasts the highest birthrate in the nation thanks to an influx of young brides from other Asian countries and some other successful policies to encourage people to have more kids.

“It’s wonderful hearing the chatter of children everywhere,” said one proud grandfather of a village in the county of Wanju in North Jeolla, which has similar policies. “The house down the road also has four kids now. They come up and bow to me.”

Korea’s population exceeded the 500 million mark in June, making it the seventh country to join the 20-50 Club of large, prosperous nations. Will it someday fall out of the club?

In 1960, there was an average of six births per woman in Korea, a rate that has been in a decline since the 1980s. Today, Korea’s fertility rate is 1.24. That is up from a record low of 1.08 in 2005 but far from the Organization for Economic Cooperation and Development (OECD) average of 1.7.

According to the OECD, a fertility rate of 2.1 children per women ensures a non-shrinking population, assuming the country doesn’t lose population through migrations or lower life expectancy rates.

In 1967, Korea’s population surpassed 30 million. It took 16 years to reach 40 million in 1983. Then it took 29 years to increase by another 10 million to 50 million. The total population is expected to peak in 2030 at 52 million and then decline if the birthrate doesn’t move up to at least 1.6 births per woman. At the current rate, the population of Korea is estimated to decrease by 10 million between 2045 and 2069.

The world has come to realize that poor people have more children as insurance policies: Kids are supposed to take care of their parents in old age. Modern, prosperous societies don’t think that way. The Ministry of Health and Welfare says there are many factors contributing to Korea’s low birthrate, including people marrying later, higher education levels for women, more working women and the higher costs of bearing and raising children. Many women reject traditional marriages, which they find stultifying, and are happy living alone. More men feel that way too.

Since 2000, Korea has been designated an “ageing society,” with more than 7 percent of its population 65 years and older. By 2017, that percentage will double.

An April survey conducted by the Korea Trade-Investment Promotion Agency showed that although Korea having surpassed the milestone of $1 trillion in annual trade last year, the declining birthrate will make it impossible to pass the $2 trillion mark.

Korea has around 30 years to remain in the 20-50 Club before a drop in the current population unless the fertility rate rises to 2.1, according to Koo Sung-yeal, an economics professor at Yonsei University. There’s little it can do to alter the constantly ageing population and rising life expectancies which will make Korea a grayer population as the years go on.

The country needs to brace for a drop in the economically active population, or the so-called “productive population group,” within 30 years, Koo said. That starts with encouraging women and the elderly to join economic activities.

“Immigration is definitely an important aspect in raising the population,” he said. “It’s already happening, so we cannot ignore it.”

Unlike Japan, which has a fertility rate of 1.37, Korea has taken a more embracing approach to immigrants. “Though it can be difficult to get here, the Korean attitude is mostly along the lines of, ‘You’re family now that you’re here,’?” he said. This starts with immigrants being able to obtain citizenship in Korea, which is far more difficult in Japan.

Former Strategy and Finance Minister Yoon Jeung-hyun has said that Japan’s loss in economic prowess “can partly be contributed to its anti-immigration policy” and that Korea can learn from Japan’s example by removing restrictions on bringing in foreign laborers and spouses.

Birthrates on the rise

Officials from the Health Ministry admit that not much research has been done on what role immigrants will play in increasing Korea’s population. But that can already be seen in the Jeolla region.

South Jeolla boasts of the country’s highest fertility rate at 1.57 in 2012 according to the provincial government, almost meeting the OECD average.

Gangjin County boasts the highest birthrate in the nation at 2.28. The county’s population peaked at 130,000 in 1967, and then people started moving away. When it hit bottom in 2008 at 40,000, bold new policies were introduced to reverse the slide. They’re working: the population was 42,000 people last year.

The county gives financial support of up to 1.2 million won ($1,085) for the first child, 2.4 million won for the second and as much as 7.2 million for more children, plus free health insurance for families with over three kids. The county has ramped up its education system and is providing settlement support for immigrants who marry a local.

“South Jeolla has seen an increase of birthrates since 2007 thanks to various polices,” said Kim Seong-ju, a welfare official at the South Jeolla government’s health and welfare division. “And the role played by the multiethnic families cannot be ignored.”

The region welcomes foreigners and that shows in the numbers.

According to Statistics Korea’s 2011 data on the country’s multiethnic population, South Jeolla’s mixed marriages constituted 14.5 percent of all marriages in the province, higher than the national average of 10 percent. South Jeolla consistently recorded the highest percentage of multiethnic marriages nationwide since 2008.

“Immigrant women usually give birth right after marriage and there are not as many employment opportunities as in cities,” Kim explained. Most stay home with the children.

There are over 8,000 married women from abroad in the province, the highest numbers being from Vietnam, China and the Philippines. Of these wives, 60 percent are housewives. Only 3 percent have full-time jobs. South Jeolla has some 10,000 children born to farmers and foreign brides, according to the provincial government.

One small farming village in Wanju County comprised of 30 households didn’t have any children for a long time. Now there are over 10, all born in the past several years.

Wanju has a total population of 85,930, of which 2,104 are foreigners. There are 540 multicultural households in the county, said a welfare official.

The areas with the highest birthrates in Korea are rural, according to Statistics Korea’s 2011 report on 2010 data. South Jeolla’s fertility rate increased by 16 percent in just five years, almost entirely because of immigrant brides and incentives for people to have children. The lowest birthrates are in the large cities, topped by Seoul at 1.02, Busan at 1.04 and Daegu at 1.1.

“Areas like South Jeolla and South Chungcheong have an average fertility rate of 1.5, near what the country’s target birthrate is, so it is important to analyze what they are doing right,” said Koo of Yonsei University.

“A large factor for high birthrates is the multiethnic marriages and births occurring mostly in farming areas,” said Lee Jae-won, a population analyst at Statistics Korea.

Since 2004, around 10 percent of all marriages in the nation have been international marriages, and many are made in rural farming village.

“These women who come from abroad do not have the aversion to bearing children that women in the city have,” said a population specialist at the Ministry of Strategy and Finance. “People in the countryside still hold onto more traditional nuclear family values and extra hands are especially vital in helping out in farms.”

The population of non-Koreans now accounts for 2.8 percent of the nation’s total population of 50.73 million. And this does not include illegal foreign workers. The number of registered aliens reached 1.41 million in 2012, according to the Ministry of Public Administration and Security, up from 1.14 million at the end of 2010, which is nearly twice that of a decade ago.

While parts of Seoul such as Yeongdeungpo and Guro Districts have high concentrations of foreign factory workers, rural areas have many as well. In Yeongam County, South Jeolla, 9.4 percent of the population are non-Korean. The fertility rate in Yeongam is one of the highest in the nation at 2.19.

Education officials say the number of multinational students nationwide will likely surpass 1 percent by 2014, and 5 percent by 2050.

Aside from immigration, the Health Ministry has pushed various policies to encourage having kids, which include subsidies for families with more than two children and subsidizing day care. It is also pushing for the retirement age to be raised to 60 from the current 57, prolonging the years seniors can work.

The number of women in their late twenties in the labor force has more than doubled since 1980 and the mean age of marriage rose nearly 6 years from 23 in 1981. The prime reproductive age is considered between 25 to 35.

“There is a limit to what the government can provide,” said Yang Seung-ho, deputy director in the Division of Population Policy at the Ministry of Health and Welfare, “and it’s important for society to provide a community where women can take maternity leave with ease of mind.”

The Lotte Group has adopted policies to help boost the birthrate. Women workers are granted a mandatory one year’s maternity leave and told not to worry about losing their jobs or harming their careers.

Moon, 39, has worked for a top hotel in southern Seoul since her early twenties. She started at the bottom of the ladder and has worked her way up to one of the most prestigious jobs, wedding planning.

“I don’t know if I could have gotten to this position if I took time off to have a baby,” she admits. “I feel like finally I have a chance to do a good job raising and providing for a child now that I am financially secure and work as my own supervisor.

“But isn’t it basically too late?”