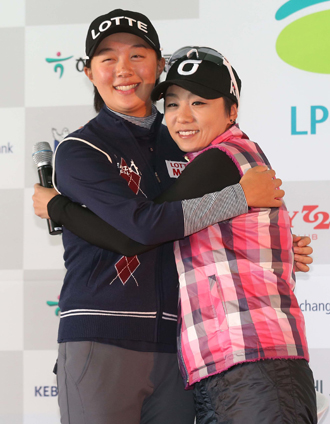 Kim Mi-hyun, an eight-time winner on the LPGA Tour, said yesterday she is calling it quits after the Tour event to be held in Korea this week.

Kim broke the news during a press conference at the Sky 72 Golf Club in Incheon, the venue of the KEB-HanaBank Championship that will kick off its three-day run today.

“It appears that many people were surprised at my sudden retirement,” Kim told the media conference. “I got surgery on my ankle and knee in January and it turned out that I am not in the right physical condition to continue a career as an athlete.”

Kim won twice on the LPGA Tour in 1999, her debut year on the big stage, which earned her the Rookie of the Year title.

Nicknamed by locals “Super Peanut” for her tiny frame, Kim won six more titles through the SemGroup Championship in May 2007, where she beat Juli Inkster of the United States in a playoff.

Throughout her 14-year LPGA career, Kim has earned $8.62 million.

Kim said that she has some regrets about retiring without achieving double-digit titles on the Tour, but said she is also excited about seeking another successful career as a coach.

Kim Hyo-joo, 17, who was the world’s No. 2 amateur golfer next to Lydia Ko, will make her debut as a professional at the KEB-HanaBank Championship.