Late rallies lift Giants over SK to even series

Late rallies lift Giants over SK to even series 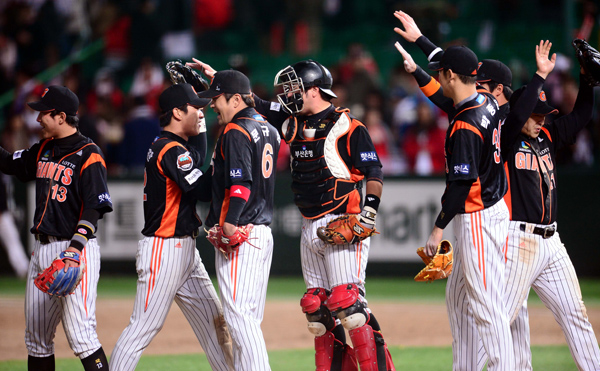 Lotte Giants players celebrate after beating the SK Wyverns 5-4 in the 10th inning of Game Two of the best-of-five playoff series held at Munhak Stadium in Incheon, Wednesday. [NEWSIS]

The Lotte Giants’ offense has carried the Busan ball club to the semifinals of the Korea Baseball Organization playoffs. On Wednesday night, the batter didn’t even need to swing to send the go-head run home in the top of the 10th inning.

With bases loaded, SK Wyvern reliever Jung Woo-ram walked pinch-runner Jung Hoon on five pitches to give the Giants a 5-4 lead, which was enough to tie the best-of-five series at one a piece.

The Giants’ bats will have to be there the next two games if they are to survive the SK Wyverns’ deep rotation, with Busan struggling on the mound.

Giants manager Yang Seung-ho has tapped Ko Won-jun (3-7) as the starter of Game 3, slated for 6:30 p.m. at Sajik Stadium in Busan. Song Eun-beom (8-3) will start on the mound for the Wyverns.

Pitching as a reliever in the showdown between the two clubs on the same stage last year, Ko, 22, allowed three hits including a two-run homer over a combined two innings. The Wyverns beat the Giants 3-2 in the best-of-the-five series to reach the Korean Series last year.

Song, with a 4.15 ERA, shut out the first six innings of Game 3 of the second playoff series against the Giants last year. He has proven stronger in the postseason, recording a 1.23 career ERA, with two wins, one loss and one save in nine post-season outings.

The Giants have even fewer options for the starter in Game 4, to be held at Sajik Stadium tomorrow night. Shane Youman (13-7) and Song Seung-jun (7-11) pitched the first and second games, respectively, and are unlikely to be ready by tomorrow.

Busan never led once during last year’s semifinals against SK, evening the series twice. Manager Yang, who is hoping to lead the Giant’s to their first title in 20 years, said he hopes they won’t repeat their mistakes this time around.

“In the third and fourth games, we will have weak starters,” he said. “I think the offense should make amends because of the situation.”

At Wednesday’s game at Munhak Stadium in Incheon, Jeon Jun-woo went four-for-four and was hit by pitch in the 10th inning that initiated the winning rally for the Giants.

The Giants were trailing from early on, by as many as three in the sixth, and the Wyverns, coming off a 2-1 victory in Game 1 on Tuesday, appeared to be moving along smoothly. But the Giants, who have now come from behind in all playoff wins this year, rallied late once again.

After the Wyverns made it 4-1 in the sixth on Cho In-sung’s two-run double, the Giants hit back in the seventh. Moon Kyu-hyun brought home off a ground-out, Kim Joo-chan hit an RBI double and pinch-hitter Cho Sung-hwan tied the game with an RBI single. Wyverns reliever Uhm Jung-wook’s pitching error contributed to the rally.

The Wyverns came close to seizing the lead again in the bottom of the seventh with lead-off man Jeung Keun-woo hitting a triple, but Giants reliever Kim Sung-bae retired the side. Kim again came through in the bottom of the ninth, with runners at first and second, sending the game to extra innings. He earned the win after 2 2/3 innings.

After the Giants got ahead 5-4 in the 10th inning, the Wyverns had runners on bases to turn the tables again. Cho and Park Jung-kwon were on first and third with one out.

Giants closer Choi Dae-sung, however, struck out Choi Youn-suk and forced Lim Hoon into a fly ball for the final out.

Giants starter Song Seung-jun allowed four hits and four runs over 5 1/3 innings including a two-run homer to Park Jae-sang that got the Wyverns on the scoreboard in the first inning.

Wyverns starter Yoon Hee-sang (10-9) allowed six hits and one run over six innings including a solo homer to Hong Seung-heon in the second. Wyverns closer Jung got the loss, allowing two hits and two runs over the final two innings.