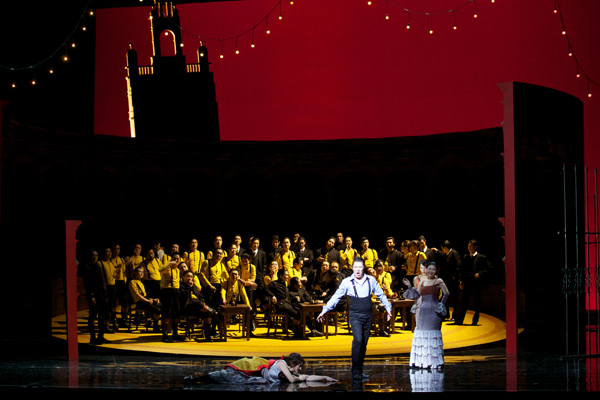 The cast of 밅armen?rehearses Tuesday for performances to mark the 50th anniversary season of the Korea National Opera at the Opera Hall of the Seoul Arts Center. The production features Kate Aldrich (right) in the lead role and Jean-Pierre Furlan as Don J?e. Provided by the KNO


Most Koreans enjoy watching musicals or plays, but when it comes to opera, they hesitate to spend money on “high class performing arts” they might not fully comprehend. Although they may find it difficult to keep their eyes on the stage while trying to read subtitles on a screen above, “Carmen” was chosen as the favorite opera in a survey by the Korea National Opera to select a repertoire for its 50th anniversary. 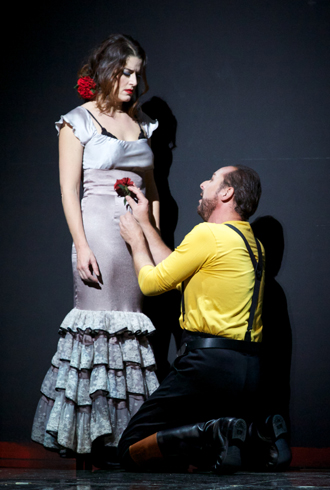 “Koreans’ love for ‘Carmen’ is so huge that almost all the tickets are sold out for the scheduled four performances, so we have decided to add one more and will have five performances in four days,” according to a statement by the KNO.

Perhaps it’s the love theme that accounts for the opera’s enduring and universal popularity or the glamorous Carmen’s flirty dance.

Whatever the reason, Belgian director Paul-Emile Fourny’s production was selected by the KNO and the first performance was last night at the Seoul Arts Center in southern Seoul.

The production will run through Sunday.

French composer Georges Bizet’s opera is a tragic love story of the beautiful Spanish gypsy Carmen, who seduces Don Jose, a naive soldier. He abandons both his childhood sweetheart and his military career for her, but Carmen soon falls out of love with Don Jose and goes for the dashing toreador Escamillo. Enraged by her betrayal, Don Jose fatally stabs Carmen in the back.

In contrast to its popularity today, “Carmen” was not well received after it debuted at the Opera Comique in Paris in 1875. Reviews criticized its depictions of proletarian life, immorality, lawlessness and Carmen’s graphic onstage death, which broke new ground in French opera.

According to the KNO, an international production team will collaborate with members of the Korean opera company to stage “Carmen.” Mezzo soprano Kate Aldrich will perform in the title role alongside tenor Jean-Pierre Furlan as Don Jose.

The New York Times said in a 2006 review that Aldrich’s “portrayal captured not only Carmen’s seductiveness, but also her radical proto-feminist pride in her own independence.”

The music of “Carmen” is also widely acclaimed for its brilliance of melody, harmony, atmosphere and orchestration. For the KNO’s “Carmen,” the Korean Symphony Orchestra will perform under the baton of conductor Benjamin Pionnier.