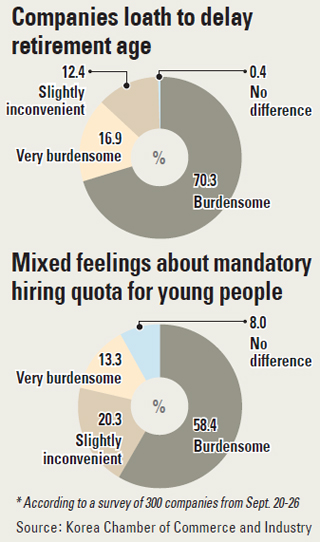 Most large conglomerates are not in favor of politicians’ move to pass several bills that would delay the mandatory age of retirement, with about 80 percent seeing this as an added burden, the Korea Chamber of Commerce and Industry (KCCI) said yesterday.

The KCCI conducted a survey with Job Korea last month on 300 companies with more than 300 full-time employees to gauge their opinion on two issues: Calls to push back the retirement age to 60, and the imposition of a mandatory quota forcing firms to hire unemployed people aged 15 to 29 years old as 3 to 5 percent of their total workforce.

According to the results of the survey, 77.3 percent of respondents said that one of the bills which aims to extend people’s working lives into older age would be a “heavy burden” if passed, the KCCI said.

The survey also showed that large companies prefer re-hiring retired employees rather than uniformly extending the age of retirement.

The average age at which employees retire at the 300 companies was found to be 56.4.

The report also showed that moves to introduce a mandatory hiring quota for young people reflects neither the current recruitment status of companies nor their actual manpower needs.

About one in five of the companies said they only add to their work force when necessary. Some 71.7 percent expressed opposition to the quota proposal for unemployed youth.

Almost half of the companies surveyed said that, on an annual basis, new recruits make up less of their 3 percent of their total staff, meaning they would have to recruit unnecessarily personnel at least in the first year to meet the quota.

“Rigid enforcements like this disregard companies’ demand for workers and financial circumstances,” said Park Jong-gap, an executive director at the KCCI. “It would be preferable to leave such decisions in the hands of each company and its management.”

The related bills have already been submitted to the National Assembly for review.