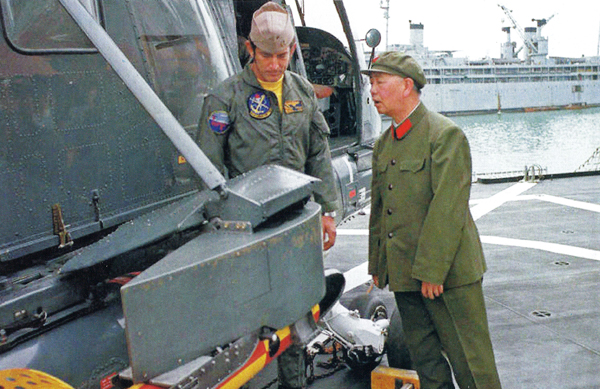 The People’s Liberation Army of China reveres two heroes with the title of “father.” Qian Xuesen is called the Father of Chinese Rocketry, and Liu Huaqing is the Father of the Chinese Aircraft Carrier. Qian was the most prominent rocket scientist of his time, and after studying and researching in the United States, he returned to China and established the foundation of China’s rocket and space program. Admiral Liu was trained on the field, spending his whole life in battle and advocating the grand vision of a Chinese Navy in the Pacific. If he were alive, he would have been proud of the Liaoning, China’s first aircraft carrier.

In January, when Liu was nearing his death, several naval commanders visited his residence. His last words were, “I cannot close my eyes if I don’t see the aircraft carrier.” The commanders promised that they would make sure the first aircraft carrier was commissioned by the next year, and he closed his eyes. In 1970, Liu, then the deputy chief of naval operations, first proposed reviewing the needs of possessing an aircraft carrier at the meeting. Other commanders thought he was crazy to mention an aircraft carrier when the Navy did not have a destroyer and Chinese people were starving in the aftermath of the Cultural Revolution. He struck the desk with his fist and shouted, “One-third of Chinese territory is the surrounding seas. How can we defend it? Have you forgotten how the country was ripped apart by the Western powers?” That’s how the “territorial waters theory” became the foundation of Chinese naval strategy.

After the meeting, he created an aircraft carrier taskforce to research models, strategies and operations involving aircraft carriers and related technologies. He devised plans to educate scientists and technological experts. In 1975, he pitched his proposal to Mao Zedong for a week and in 1980, Liu visited the United States as a naval chief. He boarded the USS Kitty Hawk for the first time. He wrote in his memoir, “Tears welled up in my eyes. And I made a pledge to my country that China would have an aircraft carrier before I died.”

He led the opening of an aircraft carrier commanding officer training program and the purchase of the Ukrainian aircraft carrier Varyag, which has been rebuilt as the Liaoning. It may take decades for the Chinese aircraft carrier to have the comparable fighting power of its U.S. counterparts. But it has already become a constant, not a variable, in regards to Korea’s national security. It is regrettable that we haven’t heard about a Liu Huaqing of Korea yet.

* The writer is the Beijing bureau chief of the JoongAng Ilbo.