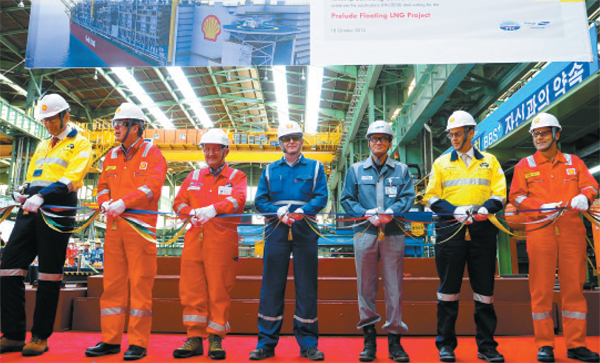 “We are cutting 7.6 tons of steel for the Prelude floating liquefied natural gas facility today, but in total, more than 260,000 tonnes of steel will be fabricated and assembled for the facility,” said Matthias Bichsel, Shell’s projects and technology director. “That’s around five times the amount of steel used to build the Sydney Harbour Bridge. Today’s ceremony marks a major milestone in this project, when the innovative thinking and new technology and engineering solutions which will make FLNG possible begin to be realized.”

When completed, the Prelude FLNG facility will be 488 meters (1,600 feet) long and 74 meters wide, making it the largest offshore floating facility ever built. When fully equipped and with its cargo tanks full, it will weigh more than 600,000 tonnes. There will be over 3,000 kilometers of electrical and instrumentation cables on the FLNG facility, the distance from Barcelona to Moscow.

“Making FLNG a reality is no simple feat,” Matthias continued. “Shell is uniquely positioned to make it a success given our commercial capability; our LNG, offshore, deepwater and marine technology; and our proven ability to successfully deliver megaprojects.”

In order to meet the world’s growing energy demand, bringing new supplies to market is critical. The Prelude FLNG facility will be deployed in Australian waters over 200 kilometers from the nearest point on the coast. It will produce gas at sea, turn it into liquefied natural gas and then transfer it directly to the ships that will transport it to customers.

An expert team from Shell will manage the multi-year construction of the FLNG facility to ensure the Prelude project’s critical dimensions of safety, quality, cost and schedule are delivered. Strategic partners Technip and Samsung Heavy Industries (the Technip Samsung Consortium) along with SBM and hundreds of suppliers and contractors around the world are all contributing valuable knowledge, skills and equipment to help make the project a success. At peak levels, around 5,000 people will be working on the construction of the FLNG facility in Korea; and another 1,000 will build the turret mooring system, subsea and wells equipment in other locations across the globe.

In the lead-up to the facility being ready to start production, a number of actions will take place, such as drilling the production wells and installation of subsea flowlines and risers and mooring chains to prepare for the arrival of the FLNG facility.

The Prelude FLNG project will highlight key partnerships that Shell has with leading Korean companies such as the Korea Gas Corporation, a 10 percent equity partner, Samsung Heavy Industries, and many local suppliers and contractors.

Prelude FLNG is the latest in a line of Shell achievements in developing new technologies for the oil and gas industry, reinforcing its leadership in technology and innovation.