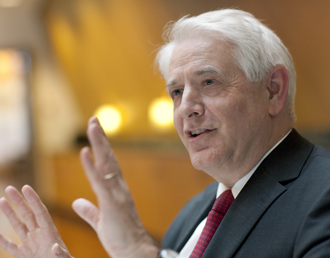 l held a steel-cutting ceremony to mark the launch of its ambitious project to construct a game-changer in the energy field - Prelude FLNG - together with its partners in the joint venture, Inpex, Korea Gas Corporation and Technip Samsung Consortium at the Geoje plant of the Samsung Heavy Industries.

Q. Please explain what kind of facility FLNG is.

A.Let me put this question in context. To meet the world’s future energy demand, expected to triple between 2000 and 2050, more of all forms of energy will be needed, including developing more gas reserves. Increasing the supply of natural gas, the cleanest-burning fossil fuel, will help to meet extra energy demand and with less impact on the environment. FLNG stands for floating liquefied natural gas, and will allow Shell to produce, liquefy, store and transfer LNG at sea. The idea is to station a floating processing and storage facility above an offshore gas field so that the produced gas can be cooled into a liquid on site. Ocean-going carriers then offload the LNG as well as other liquid by-products for delivery to the markets. FLNG will enable us to develop offshore gas resources ranging from clusters of smaller, more remote fields to potentially larger fields via multiple FLNGs.

FLNG facility construction is the first in the world. What is the specialty and merit of FLNG facility?

We believe that FLNG will enable the development of gas resources ranging from clusters of smaller, more remote fields to potentially larger fields via multiple facilities where for a range of reasons an onshore development is not viable. This can mean faster, cheaper, more flexible development and deployment strategies for resources that were previously uneconomic, or constrained by technical or other risks.

Shell’s FLNG design can provide high production rates, up to six million tonnes per annum (mtpa) of liquids, can process a wide range of gas compositions, can export LPG and uses an efficient dual mixed refrigerant liquefaction cycle. It does not have to be moved during severe weather conditions which will increase the availability of the plant. 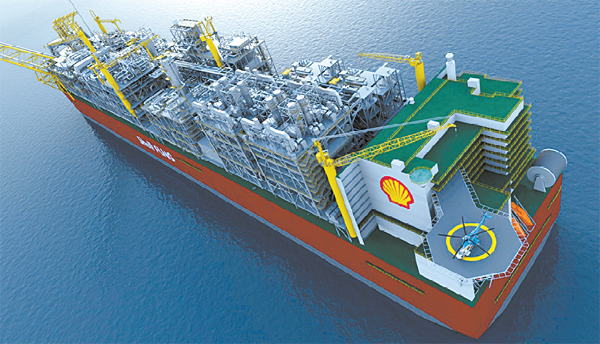 A computer-generated image of the Prelude floating liquefied natural gas.


What is the business scale and significance of FLNG in the context of other projects Shell is involved in?

FLNG is the latest in a line of Shell achievements in developing new technologies for the oil and gas industry, reinforcing our leadership in technology and innovation. Shell has been working on FLNG technology for more than a decade, drawing on more than five decades of expertise in LNG technology, LNG shipping and operating offshore oil and gas installations.

Making FLNG a reality is no simple feat; Shell is uniquely positioned to make it a success given our commercial capability; our LNG, offshore, deepwater and marine technology; and our proven ability to successfully deliver megaprojects. We are very excited about this new technology, which will further strengthen our LNG leadership position.

FLNG will change the current process of transferring the gas from the marine gas field to land. How much profit are you expecting from the shift?

FLNG will first be deployed in Australia and will bring significant benefits to the country. By developing offshore gas resources that may otherwise be uneconomical to develop it can provide revenue and create new jobs. According to an independent analysis by ACIL Tasman, over the 25-year life of the Prelude FLNG project, it will add more than 45 billion Australian dollars to Australia’s GDP; create approximately 1,000 jobs Australia wide; contribute total tax revenues of more than 12 billion Australian dollars; and improve Australia’s balance of trade through the export of LNG, LPG and condensate.

Samsung Heavy Industries will be in charge of FLNG construction. What was the reason you have chosen Korean consortium as your business partner?

In 2009, Shell signed a master agreement with the Technip Samsung Consortium, or TSC, to design and build multiple FLNG facilities. The consortium is providing engineering, procurement, construction and installation for the facility. Shell will deploy at its Prelude gas field off the northwest coast of Australia.

Prelude is the first FLNG facility built under this agreement. TSC is essential to the success of the Prelude FLNG project. Technip, leader of the consortium, is one of the largest firms in the fields of project management, engineering and construction for the oil and gas industry. And the Prelude FLNG facility will of course be built at Samsung Heavy Industries’ Geoje Island shipyard here in Korea. The shipyard is one of the largest shipyards in Korea and among the largest in the world.

An expert team of Shell and contractor staff will manage the multiyear project’s critical dimensions of safety, quality, cost and delivery schedule. TSC, along with hundreds of suppliers and contractors around the world are all contributing valuable knowledge, skills and equipment to help make the project a success.

What impact does FLNG have on the environment?

FLNG technology provides a low-footprint alternative for gas developments where undersea pipelines and ports would exact too high a toll on the marine or coastal environment.

In general, Shell FLNG has low environmental footprint when compared to a land-based LNG development. Having the facility located at the gas field reduces materials usage, and impact on land and seabed.

Also there is less environmental disturbance during decommissioning because the facility can be easily disconnected and removed before refurbishing the facility and re-deploying elsewhere.

It will reduce emissions of carbon dioxide; no compression or dehydration needed to get gas to shore and thermal efficiency improved by being able to use cooling water from 492 feet below. There will be 95 percent less land and seabed disturbance - no shore crossings for pipes and no onshore construction and associated works.

What is the project process schedule? From when can you extract gas? Where will be the main suppliers?

Prelude FLNG is a relatively fast LNG development with startup expected around 10 years from the discovery of gas at the field. With regard to buyers, we do not comment on specific commercial arrangements.

Please describe in detail of the facility.

The Prelude FLNG facility will be 488 meters long and 74 meters wide. When fully equipped and with its cargo tanks full it will weigh more than 600,000 tonnes, making it the largest offshore floating facility ever built. It has around 260,000 tonnes of steel in the facility alone, around five times the amount of steel used to build the Sydney Harbour Bridge. Prelude’s total production will be around 5.3 mtpa, of which 3.6 mtpa is LNG, the remainder being LPG and condensates.