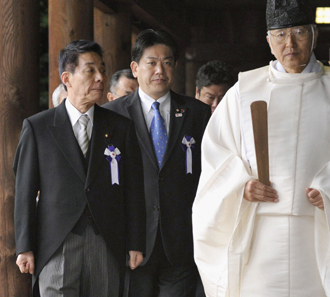 Japanese lawmakers, including Land Minister Yuichiro Hata, center, are led by a Shinto priest as they visit the Yasukuni Shrine for the war dead in Tokyo yesterday following a visit by former Prime Minister Shinzo Abe the day before, straining relations with both Korea and China. [REUTERS/YONHAP]

Following a visit to the Yasukuni Shrine on Wednesday by former Japanese Prime Minister Shinzo Abe, a group of senior government officials and lawmakers, including two cabinet ministers, visited the shrine yesterday and offered prayers to the war dead.

The visits sparked anger from Korea, which has been urging Tokyo to confront and atone for its wartime brutalities.

Yesterday, Land Minister Yuichiro Hata of the ruling Democratic Party of Japan and Postal Minister Mikio Shimoji of the People’s New Party paid their respects at the war shrine with dozens of lawmakers.

Their visit came after Abe, head of Japan’s top opposition Liberal Democratic Party and a front-runner to become Japan’s next prime minister, paid his respects at the controversial shrine in Tokyo, which honors Japan’s war dead, including 14 Class A war criminals from World War II. 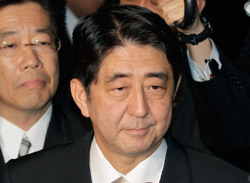 Hata also visited the shrine on Aug. 15, a memorial day marking the end of the war, with Jin Matsubara, president of the National Public Safety Commission.

That visit came several days after President Lee Myung-bak made a surprise visit to the Dokdo islets, which Japan claims as its territory.

During yesterday’s visit, Hata and Shimoji said their visit was “private” and that they “hope the visit will not have an impact on diplomatic matters” with countries like Korea.

Visits to the Yasukuni Shrine by Japanese high-profile figures have long been a contentious issue between Japan and neighbors like Korea and China with bitter memories of Japanese brutalities.

The visits are seen by Korea and China as Japan’s refusal to acknowledge or atone for its colonial past and wartime misdeeds.

In response to yesterday’s visits, the Ministry of Foreign Affairs and Trade protested and expressed “extreme regret.”

“Paying respect at the Yasukuni Shrine by Japan’s politicians, including cabinet members, is an act of irresponsibility and a refusal to acknowledge neighboring countries that have been victimized by Japanese imperialism in the past,” said Cho Tai-young, spokesman of Seoul’s Foreign Ministry, yesterday, at a briefing.

“We believe the visits were private ones based on personal belief and we have nothing more to elaborate on such private visits,” Fujimura said.

The Foreign Ministry also expressed “deep regret and concern” on Wednesday after former Prime Minister Abe’s visit, calling the shrine “a symbol of the Japanese war of aggression and militarism.”

“[Abe’s visit to the shrine] was the latest of a flurry of Japan’s provocative moves against China and will further poison bilateral ties,” China’s Xinhua News Agency stated.