South Korean government officials recorded a closed-door dialogue between South and North Korean leaders during the 2007 inter-Korean summit, and the state intelligence agency currently has the transcript and the digital voice file, a former government official who served under the Roh Moo-hyun administration told the JoongAng Ilbo. 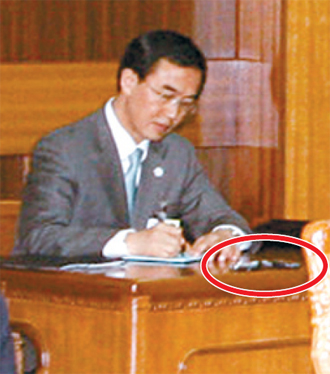 The former official, who was involved in organizing the summit, told the JoongAng Ilbo in an exclusive telephone interview Wednesday that “Cho Myoung-gyon, then presidential secretary for foreign and national security affairs, recorded all conversations between President Roh Moo-hyun and North Korean leader Kim Jong-il with a portable digital voice recorder.”

“After they came back to Seoul, Kim Man-bok, then chief of the National Intelligence Service, and Cho, who attended the meeting with Roh, wrote a transcript based on the audio file and some notes they made during the conversation,” the official said. After that, the original transcript was copied and the duplicate was given to the Blue House. Kim’s and Cho’s notes as well as the voice file were also submitted to the NIS. “The transcript was more than 100 pages of A4-size paper,” he added.

A photo in the JoongAng Ilbo archive shows the summit. In it, Cho is sitting separately behind the negotiation table and there is a device that appears to be a voice recorder.

No one recorded the dialogue for the North. There were only Kim Jong-il and Kim Yang-gon, a secretary for the ruling Workers’ Party’s unification department.

Last week, ruling Saenuri Party lawmaker Chung Moon-hun made the bombshell allegation that Roh disavowed the Northern Limit Line, the de facto maritime border between North and South Korea, in a closed-door conversation with Kim at the summit.

The allegation rocked the presidential race because the Democratic United Party’s candidate, Moon Jae-in, Roh’s chief of staff at the time, was the South’s chief organizer for the summit. Chung’s allegation portrays Roh and his allies as being pro-North Korea, even on such issues as the de facto maritime border.

Chung also said that only Pyongyang recorded the meeting and wrote a transcript. And then they allegedly offered a duplicate to the South.

However, on Wednesday, a high-ranking ruling party official told a local newspaper that the Roh administration ordered the Blue House to shred the duplicate after the summit.

“I think there’s been a misunderstanding about the recording,” the official said. “In fact, a secretary of NIS chief Kim tried to bring a recorder into the meeting and North Korean officials blocked the secretary, but people seem to misunderstand that it was Cho who was blocked.”

A high-ranking Saenuri Party official also told the JoongAng Ilbo that “sometime between February and March in 2009, President Lee Myung-bak was informed about the transcript provided by the NIS. I guess Representative Chung somehow saw it.”

Saenuri Party officials told the JoongAng Ilbo that the reason Lee reviewed the transcript was because in October 2008, on the first anniversary of the Oct. 4 declaration, Roh criticized the newly elected Lee for not following the declaration Roh made with the North at the 2007 summit.

As of now, the NIS chief Kim and the former Unification Minister Lee have both told the JoongAng Ilbo that there was no secret meeting, no secret deal and no such transcript.

Under current law, in order to produce the transcript written by the NIS, more than two-thirds of incumbent lawmakers have to approve it.

Suh Sang-kee, a ruling party lawmaker and the chief of the National Assembly’s Intelligence Committee, said on Wednesday that the 12 ruling and opposition lawmakers who are members of the committee, including himself, can legally open the transcript stored in the NIS now. So he said he will suggest they do it.

Some of the dialogue on the audio clip is unclear, the official said, because secretary Cho was seated a bit far from the two leaders.

“At the time, I remember the NIS chief Kim asked Cho why he couldn’t record clearly all of the conversation, and Cho answered he was ‘too nervous’ to concentrate on the recording,” the official said. Another government official also said that, “In the case that there could be some problems in the recording, [they] can’t help but write down every single word of the conversation. So the notes written by Cho and Kim could also become a good archive to make up for possibly omitted parts in the recording.”

However, a Unification Ministry official said “the transcript they wrote might not be that accurate because secretaries tend to summarize a long conversation or omit a sensitive subject. But an audio file gives a vivid depiction of the entire situation.”