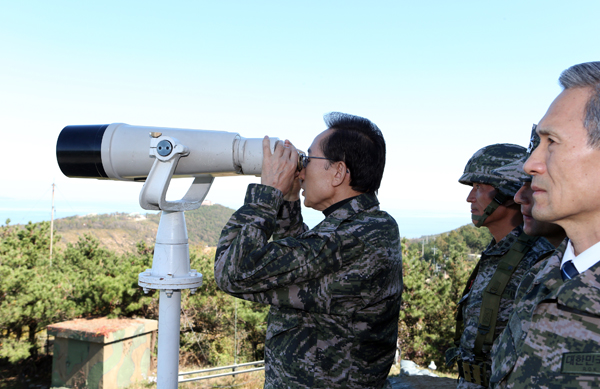 President Lee Myung-bak observes North Korea through binoculars yesterday while visiting Yeonpyeong Island. Lee’s visit to the northern border island is a first for an incumbent president. Lee ordered troops there to guard the disputed western maritime border between the two Koreas with their lives. [YONHAP]


President Lee Myung-bak yesterday visited Yeonpyeong Island and ordered troops there to guard the disputed western maritime border between the two Koreas with their lives.

Lee’s visit to the island, which was shelled by North Korea on Nov. 23, 2010, causing four fatalities, came after the allegation by a ruling party representative that Lee’s predecessor disavowed the Northern Limit Line, the de facto maritime border between the two Koreas, during a 2007 summit in Pyongyang.

That allegation has become one of the main issues of the presidential race, hurting the Democratic United Party’s Moon Jae-in, who was chief of staff for former President Roh Moo-hyun and a chief organizer of the 2007 summit.

The DUP and Moon deny the allegation.

In an unprecedented visit - no sitting president has ever visited the island - Lee stopped at an observation post, a radar installation and the Marines’ 7th Artillery Company. Lee had lunch with the troops and residents of the island.

Lee said twice that soldiers need to defend the NLL with their lives.

“As I stand here, I can really feel the confrontation [with the North],” Lee said after observing the North through binoculars.

“I can see the importance of Yeonpyeong Island. All the Marines must remember that we must defend the NLL with our lives until unification comes. That will keep the peace and protect the people’s lives and safety.”

Lee also said the NLL is crucial because it stops provocations. “Securing this line benefits both Koreas,” he said.

Yeonpyeong Island is 1.5 kilometers (0.9 mile) south of the NLL, three kilometers away from the North’s Seo Island and 12 kilometers off its coastline.

The NLL was drawn after the Korean War armistice in 1953 by the United Nations Command, but the North does not recognize it officially.

Since 1999, deadly border clashes have taken place near the NLL, including the North’s sinking of the South Korean warship Cheonan in March 2010 and the shelling of Yeonpyeong, the first attack on Korean soil since the Korean War.

Lee yesterday did not deny that his trip to the island was political and prompted by the controversy over his predecessor.

“Although some say this and others say that these days, members of our military must defend the NLL with their lives until unification comes,” Lee said once again during his lunch with the troops and locals.

A Saenuri Party lawmaker, who served in the Lee Blue House as a unification affairs secretary, made a bombshell revelation last week that President Roh Moo-hyun told his North Korean counterpart Kim Jong-il during their 2007 summit in Pyongyang that he didn’t recognize the NLL.

According to the Blue House, Lee’s trip was also intended to heighten the vigilance of the troops. The South Korean military has been under fire for lax discipline after a North Korean defector managed to slip across the Demilitarized Zone and defect without being noticed by the soldiers in the 22nd Division guarding the area in Gangwon.

“I’ve been worried so much thinking about the 22nd Division incident,” Lee told the troops on the island yesterday. “But I feel secure, as I came here.”

Lee told the troops yesterday not to hesitate to counter any attack with a tough retaliation. “When they attack, we must strike back strongly,” he said, adding that thorough preparation and stern retaliation will deter further attacks. The DUP condemned Lee for attempting to intervene in the presidential election. “Lee’s visit came amid the wasteful political fights initiated by the Saenuri Party over the NLL,” said Park Yong-jin, spokesman of the DUP. “We cannot help but question Lee’s political intention in making the visit at this time. If Lee visited Yeonpyeong Island with an intention to influence the presidential election, he won’t be able to avoid a negative reaction from the people.”