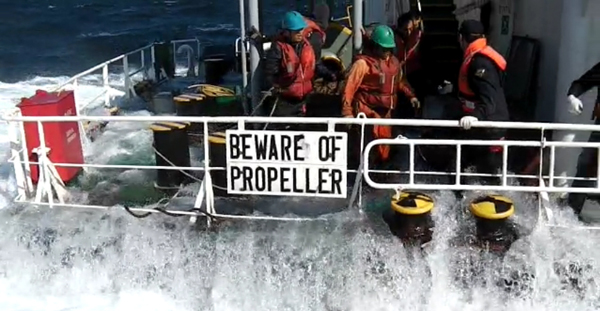 Sailors of the Malaysian freight vessel wait to be rescued from a sinking ship. The Jeju Coast Guard said a Malaysian freight vessel that was heading from Busan Port to Singapore with 19 sailors was damaged by its own cargo that was displaced by strong waves 61 kilometers (37.9 miles) west of Chagwi Island at 7:14 a.m. The Coast Guard took 15 of the 19 sailors on board the rescue boat, but the boat was capsized by strong waves, causing five sailors to die. Image provided by the Jeju Coast Guard


JEJU - A rescue boat of the Jeju Coast Guard that went on a rescue operation capsized, leading to the death of five people.

The Coast Guard dispatched the rescue boat with four rescue team members after receiving a request from a 5,436-ton Malaysian freighter, which was damaged by strong waves at 61 kilometers west of Chagwi Island at 7:14 a.m.

The Coast Guard said the Malaysian vessel was heading to Singapore from Busan Port with 4,472 tons of steel coils and 2,100 tons of machine equipment as well as 19 sailors, but the port side of the ship was damaged by the heavy freight that was struck by strong waves.

High waves capsized the rescue boat and three of the sailors drowned and two others died at a Jeju hospital.