A 37-year-old woman surnamed Yu, who declined to give her first name, received a text message in July saying she was entitled to a small loan of 200,000 won ($181).

Yu, who was under financial distress due to the loss of her job, did not waste time calling the number in the message, which connected Yu with a call-center worker.

Yu was told in order to get a loan she needed to open up a smartphone account for three months, without a sign-up fee, and could close the account after the first three months. 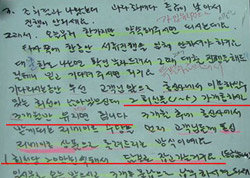 Yu faxed copies of her identification document for the subscription, which she thought she didn’t have to pay, and received 200,000 won in her bank account from the loan service as promised.

What Yu didn’t expect was the bill for 1 million won for the cell phone she thought she was getting for free.

The Seoul Metropolitan Police Agency reported Tuesday they have arrested a 42-year-old suspect surnamed Choi for raking in 3.5 billion won from 2,100 people with the smartphone fraud scheme.

The police also booked his accomplice Lee without physical detention for the same charge.

The two suspects mainly targeted people who have difficulties borrowing money from banks due to their low credit rating.

The suspects were able to buy numbers of those financially squeezed people from brokers illegally selling individual profiles.

“Most of the victims tricked by the scheme are under extreme financial constraint,” said the police.

This new type of phone fraud scheme, known as phishing, has emerged and the number of cases has increased dramatically this year due to the wide use of smart phones, according to police.

Authorities reported there were seven cases of smartphone voice phishing crimes as of August this year, totaling 6.1 billion won in damage from 3,800 victims.

The suspects in the smartphone-fraud-scheme received between 400,000 won and 600,000 won from mobile phone carriers as subscription subsidies.

Of the subsidies, they wired 200,000 won to victims’ bank accounts as promised while pocketing the remaining amount of the subsidies.

“Any text messages mentioning a loan under the condition of a three-month mobile phone subscription for free are total frauds,” warned the police.